Fastest runners in the history of sports 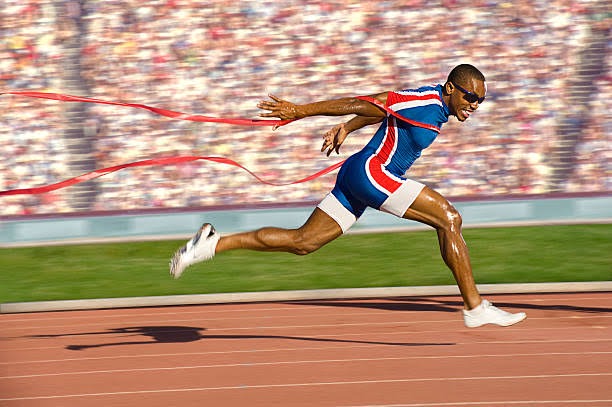 With her long fingernails and equally outsized personality, Florence Griffith-Joyner became one of the biggest celebrities in the history of women’s athletics. Flo-Jo backed up her style with substance on the track, where she earned the title of world’s fastest woman.

Darrell Green was widely considered the NFL’s fastest man, even before winning the competition of that name (in which he had a 4-0 career record).

A track All-American at what is now Texas A&M-Kingsville, Green had one of the longest and most successful careers of any corner in history. He intercepted a pass in an NFL-record 19 consecutive seasons, all of them with the Redskins.

Last February, Green was clocked at 4.43 seconds in the 40…on his 50th birthday.

Bob Hayes was already an international star when he entered the NFL, having won gold in the 100 meters (in which he already held the world record) in the 1964 Olympics. “Bullet Bob” had minimal football experience when the Cowboys drafted him in 1964 as a wide receiver.

Hayes would be one of the rare success stories of the track-to-football conversion, setting a Dallas record for receiving TDs (12) in his first season of pro football. He would play all but four games of his Hall of Fame career in a Dallas uniform and amassed 371 career catches for 7,414 yards.

He averaged 20 yards or better per catch four times, leading the league twice (including a career-high 26.1 in 1970).

In a sport dogged by repeated performance-enhancing drug scandals, Asafa Powell has been one of the cleanest and most consistent competitors. He set a world record in the 100 meters with a time of 9.77 seconds in 2005, equaled it twice the next year, then topped it with a 9.74-second performance in 2007.

Though Powell has been plagued by injuries in recent years, he did find time in 2010 to break the world record in the 100 yards, setting the new mark at 9.07 seconds.

When it comes to the value of speed in baseball, Exhibit A is Rickey Henderson. The career leader in steals by more than 300, Henderson used his base-running dominance to become one of the most potent offensive weapons in the game.

Henderson also holds the major league record for steals in a season, with 130 in 1982. He made his steals count, too, breaking Ty Cobb’s all-time record with 2,295 runs scored in his career.

Cut down too soon by a hip injury, Bo Jackson was one of the fastest and most exciting runners in football history. Coming out of Auburn, he was timed at 4.13 seconds in the 40 at the combine, and few who saw him on the field doubted that he really was that fast.

In Jackson’s four NFL seasons, he had long runs of 91, 92 and 88 yards, and averaged as many as 6.8 yards per carry while never recording fewer than 500 yards in a season.

Bo would’ve gotten a lot more good out of his speed on the baseball field if it hadn’t been for his dismal .309 career OBP.

One of America’s most accomplished and most beloved sprinters, Carl Lewis won nine gold medals (10 medals total) over the course of four Olympic appearances. Lewis tied or broke the world record in the 100 meters three times in his career, with his best performance coming in 1991 at 9.86 seconds.

Lewis was also one of the top long-jumpers in history, and his 8.87-meter effort in 1991 is the second-best low-altitude performance of all-time.

As brilliant as Jesse Owens was at the Berlin Olympics in 1936, his greatest performance may have come a year earlier.

At the 1935 Big Ten track championships, Owens (competing for Ohio State) tied the world record in the 100 yards and set world records in the long jump, 220 yards, and 220-yard low hurdles…in the space of an hour.

His four gold medals in Berlin were a bitter pill to swallow for a Nazi German government that was trying to claim all black people were inferior in all things.

Jackie Robinson is revered as one of the greatest players in baseball history, but those who saw him at UCLA say that baseball wasn’t nearly the strongest of the four sports he lettered in.

A track and football star who thrived on speed and explosiveness, Robinson channeled his talents into becoming the most exciting runner baseball had ever seen.

Robinson led the NL in steals twice, and famously recorded 19 steals of home. Legend has it that television producers invented the split screen so viewers could watch Robinson toy with pitchers on the base paths.

The undisputed fastest man in the world, Usain Bolt shattered his own world record in the 100 meters with a time of 9.58 seconds in 2009. Bolt has set the last three world records in the event, and his current record is 0.16 seconds faster than Asafa Powell’s previous mark.

Content created and supplied by: Gracious574 (via Opera News )