By Surebwoii (self media writer) | 1 year ago

The Barça coach celebrated his team's exhibition in San Sebastián, but recalled that "we are still behind Atlético" 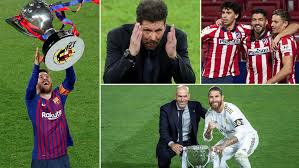 Ronald Koeman could not hide his satisfaction after FC Barcelona's defeat of Real Sociedad . The Barça team completed an extraordinary game and the Dutch coach, full of joy, did not stop smiling at the press appearance after the match. The Wembley hero, whose project on the club bench has taken a huge qualitative leap in recent months, maintained an optimistic and hopeful tone in view of the decisive stretch of the season, but also sent several reassuring messages. Prudent. Neither the League was lost at the end of 2020 nor is it won now , after a Barça run of practically flawless results so far this year.

Win is important to ourselves . The team is self-confident and physically strong. The result does not mean anything for the future, any game will be difficult. We will have to be prepared, ”he declared. “I am not convinced that we will not lose any games. We will play very difficult commitments. What we have to do is continue in this line: good pressure, concentration, defensive solidity, good physical level and effectiveness in front of goal, "he added. For Koeman, “it is incredible to score six goals away from home, at the Real Sociedad stadium”, but “the most important thing is that we have shown that we are a strong team.

According to his point of view, "there is a lot of League left." “ Until the end of the season nothing will be decided . Atlético de Madrid are doing well and today they have proven that no game is easy. Madrid will also be in the fight, "he said. “At the beginning of the year we had a lot of problems. We have changed a lot of things. Any squad needs time to adapt to the ideas of a new coach and project. At the beginning of the season we were ineffective and we made defensive mistakes. Now we are much more comfortable on the pitch and that shows a lot, "said the Barça coach, who recalled that" we are still behind Atlético "and insisted that Madrid" have improved.