The Gunners keep reshuffling their squad, as they are planning to offload some players, in order to bring new signings to the Emirates in this summer's transfer window. Without a doubt, the club is ready to chase Manchester City, Chelsea and others next season. The Mikel Arteta's team has been selling and loaning out some of their young players, while another has left the club permanently. Obviously, the Spanish manager isn't ready to joke around in 2021-2022.

Officially, Arsenal's Daniel Oyegoke has signed a 3-year contract with Brentford, as he will stay with the young Bees until June 2024. In other words, the newly-promoted Premier League side have been gathering reinforcements ahead of the next campaign, having added the Gunners' young wizard to their team. 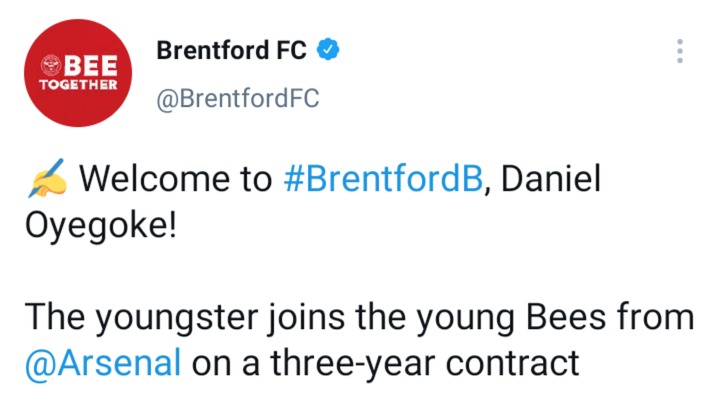 The Mikel Arteta's club appears to be endowed with a plethora of brilliant and talented young players, but they are unable to retain them all. And, that's the main reason they keep offloading some young ballers this summer window. Meanwhile, Daniel Oyegoke revolves around versatility, as he can comfortably play as a defender and as a forward. He has many things in common with Gabriel Magalhães, in terms of aggressiveness, ball movement and control.

The 18-year-old footballer was in the same squad as Bukayo Saka, Smith Rowe and others. Definitely, he's full of potential and Brentford can count on his defensive abilities and capabilities. Actually, the Englishman can not really make it into the starting XI, because there are so many experienced defenders in the team. And, Mikel Arteta does not really love having young players in his squad. So, it is wise enough to let him leave permanently.