According to several reports, Joan Laporta is willing to give Ronald Koeman more time to turn his awful statistics around, as they want the likes of Sergio Agüero, Ousmane Dembélé and Ansu Fati to return to the squad before they could judge the manager's performance. As a result of that, the Dutch gaffer could finish the 2021-2022 campaign at Camp Nou. However, Barcelona are planning to get a new manager next season, as they have been linked with many tactical and experienced coaches. With that being said, Erik ten Hag remains the No.1 option to succeed Ronald Koeman in the 2022-2023 season. Of course, the Ajax gaffer befits the Blaugranas' style of play, having seen his all-around performances in the Eredivisie league.

Meanwhile, there's a particular way Erik ten Hag could lineup at Camp Nou next season, if he really replaces their current manager. Apparently, Joan Laporta is a big fan of the Dutchman, because he's such an attack-minded coach, as regards his display at Ajax since December 2017. Frankly, the likes of Gavi, Nico González, Oscar Mingueza, Pedri González, Ansu Fati and Riqui Puig will get enough playing hours, because the coach loves to have young players in his squad. In other words, footballers like Samuel Umtiti, Philippe Coutinho, Luuk de Jong, Martin Braithwaite, Sergio Busquets, Sergi Roberto may leave Camp Nou, because the Ajax boss doesn't give room for too many old players around him. Without a doubt, that's another reason Joan Laporta is hell-bent on signing Erik ten Hag to succeed Ronald Koeman next season.

Obviously, Ajax are endowed with many youngsters in their starting XI, and they are doing well in all competitions. Which means Barcelona can rely on the Dutch manager, as he would like to sign some new players during the summer's transfer window next year. Nevertheless, the lineup below could be his starting eleven, because he wouldn't want to end up like his country-man, particularly when he knows that Barcelona's job comes with a lot of pressure.

Without a doubt, the new manager wouldn't dare replace Ter Setgen, because he's amongst the top goalies in Europe's top-5 leagues. Having said that, the German goalstopper continues as Barcelona's No.1 goalkeeper. Apparently, he has the ability to take the Blaugranas' performance to the next level, and the club can really restore its lost glory in the world of football. Of course, Ter Setgen can keep many clean sheets in all competitions, if the team's defense line is well balanced and composed. Erik ten Hag usually goes with the formation of 4-3-3, as regards his style of play at Ajax. Apparently, there's no way he will play the likes of Jordi Alba and Gerard Piqué because of their ages. Therefore, Matthijs de Ligt and Ronald Araujo dazzle as centre-backs, while Alejandro Balde anchors the left-back position and Sergiño Dest still holds his usual right-back role. According to some reports, Barcelona are linked with the Juventus centre-back, as they want to bring him to Camp Nou next summer. As a result of that, the Dutch footballer may join the Blaugranas because of his former manager. Potentially, this back-four is more balanced than the current one Ronald Koeman is using, so the Catalans are expected to go far in all competitions in 2022-2023. Apparently, Sergio Busquets can not make it to the starting XI under Erik ten Hag, and Pedri González may be a substitute because he's not a defensive midfielder. As a result of that, Dani Olmo or Ryan Gravenberch could arrive at Barcelona next summer, so as to strengthen the midfield. Initially, the Blaugranas are already linked with the RB Leipzig's wizard, and the Ajax manager may bring his holding midfielder to Camp Nou, if he joins the LaLiga side as Ronald Koeman's successor. With all that being said, Nico González dazzles as a single defensive midfielder, while Frankie De Jong and Gravenberch or Olmo play as double No.8. In this formation, the Barcelona academy product will have to step up his game, because he will control the midfield alone. In addition, both Dani and Ryan are brilliant creators, as they are able to subdue or dumbfound the opposing players with their dribbles, passes and skills. Without being sarcastic, Erik ten Hag can take Barcelona to the next level, if he really arrives at Camp Nou and gets his hand on this midfield setup in 2022-2023. 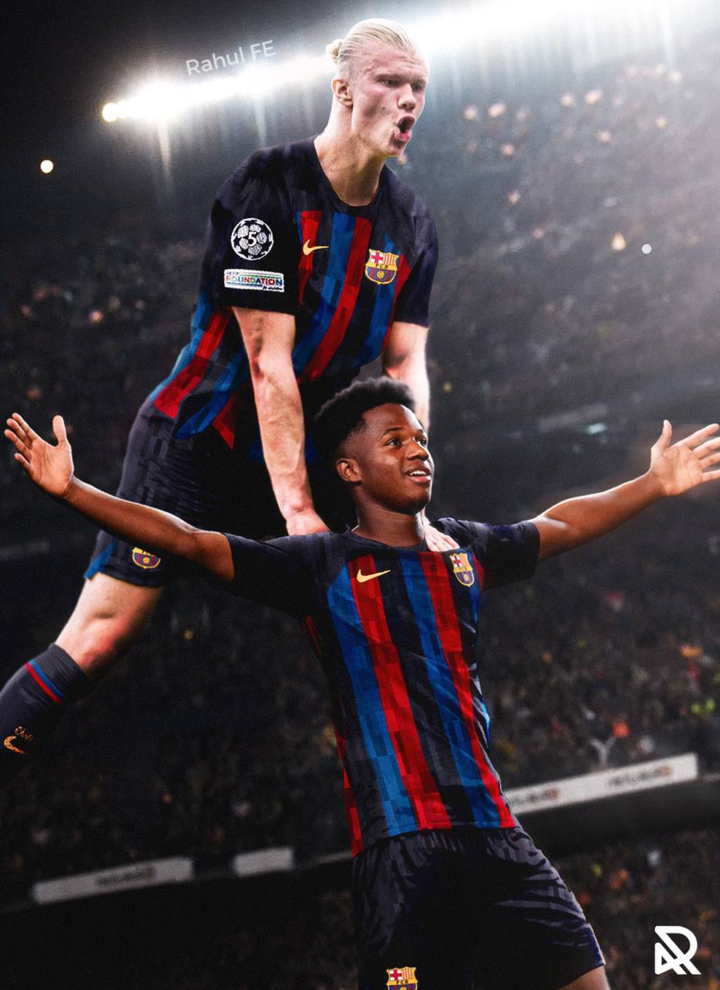 The Ajax boss will push hard to bring Erling Haaland to Barcelona next summer, especially when Joan Laporta has a nice relationship with the player's agent (Mino Raiola). Since he loves the counterattack style of play, Memphis Depay will play from the left-wing, Ansu Fati from the right-wing and the Norwegian youngster as a central-forward. However, signing Haaland would be a little bit competitive next year, as the likes of Real Madrid, Manchester United, Liverpool and others are all interested in him. Nevertheless, this front-three is well-equipped to break any defense line in Europe's top-5 leagues. Depay and Fati will use their dribbling skills to create spaces and chances for Haaland, while he positions himself to score goals. With this frontline, Barcelona may go far in LaLiga and the UEFA Champions League. Simply put, Erik ten Hag is such an attack-minded coach, who loves to have many young players in his team based on his formation and pattern of play at Ajax. As a result of that, the above lineup could be his starting XI at Barcelona next season, if he joins the Blaugranas as Ronald Koeman's successor. The Dutch manager is one of the most tactical and experienced coaches in the world of football, as he usually takes Ajax to the UCL in every season. With that being said, Joan Laporta can lean on him to restore the club's lost glory in Europe's top-5 leagues.

Should Barcelona sign Erik ten Hag as Ronald Koeman's replacement? Can he win anything with the above lineup?