3 Things That Must Happen At WWE NXT TakeOver: WarGames

A major portion of the WWE Universe waits for Survivor Series each year, while a number of passionate NXT fans await the annual WarGames event.

The TakeOver: WarGames event is famous for its traditional caged WarGames matches inside a double ring. The newly formed Kings of NXT will look to end The Undisputed ERA's supremacy over the Black and Gold brand.

On the other hand, Candice LeRae and Shotzi Blackheart will lead separate teams during the women's match to prove their worth. Dakota Kai, Toni Storm, and Raquel Gonzalez will joine LeRae, while Rhea Ripley, Ember Moon, and NXT Women's Champion Io Shirai will join Blackheart.

Dexter Lumis and Cameron Grimes will compete in a Strap match at TakeOver: WarGames. The two Superstars have been continuing their rivalry for some time now. The only Championship match scheduled for the event will see Leon Ruff defend his NXT North American Championship against two top Superstars, Johnny Gargano and Damian Priest.

NXT could be looking to pull off some big matches, and possibly a few surprises, during the event. The action will definitely be off the charts at this pay-per-view. Let's look at the five things that must happen at NXT TakeOver: WarGames this year. 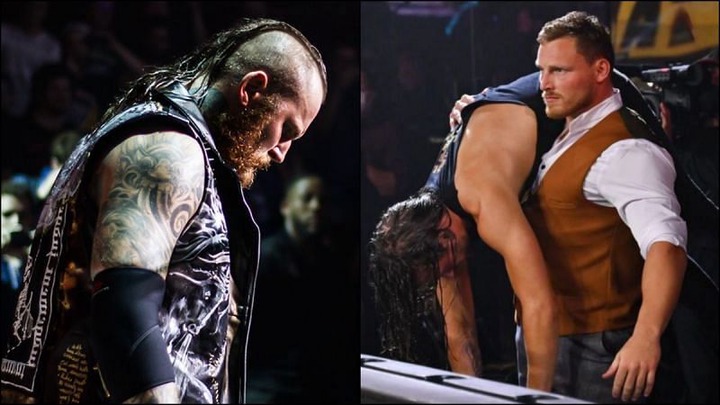 Tommaso Ciampa gets back in the zone at NXT TakeOver: WarGames

Earlier this week on WWE NXT, Tommaso Ciampa interrupted a class being held by Timothy Thatcher. Ciampa has been trying to get in Thatcher's face for some time, and he tried to leave a final mark before TakeOver: WarGames.

While Thatcher is the newer Superstar in NXT who deserves a push, it should be Ciampa who must be allowed to win the match. Ciampa has been out of the picture for some time now and the veteran needs to get back in action with some victories.

On Sunday, we must watch the two men put on an incredible match early on the card to get some notice. While Ciampa was once on top of the mountain in NXT, he needs to start rebuilding again after some major losses late last year and early this year.

A victory over Thatcher will allow Ciampa to come back strong and get back in the zone before building towards the Championship picture. He would turn out to be a good contender to Finn Balor's NXT Championship following TakeOver: WarGames.

Leon Ruff  has become an overnight mega star in WWE NXT. The Superstar who first emerged as an enhancement talent on the main roster earlier this year to take quick losses at the hands of Aleister Black and Sheamus has quickly become the NXT North American Champion. He will now be defending his title against two top men from NXT, Damian Priest and  Johnny Gargano , at TakeOver: WarGames.

Ruff has already gained some momentum by defeating Gargano twice and then teaming up with Preist to defeat Legado del Fantasma. While Priest and Gargano are both former NXT North American Champions and are more established as compared to Ruff, WWE must stick to their decision of crowning the new Superstar as the Champion.

At TakeOver: WarGames, Ruff must defeat Priest and Gargano to retain his title, and effectively end his rivalry against the two men in the process. NXT can then continue with the rivalry between Gargano and Priest while allowing Ruff to get into a new rivalry for the title soon after.

3 The women deliver some excellent moments at NXT TakeOver: WarGames

As mentioned in the intro, we can expect the Superstars of NXT to deliver some of the top moments of the year during their matches at NXT TakeOver: WarGames.

Most of the men in the WarGames match are not highflyers, and it will be up to the women to perform some jaw-dropping moves. With some of the top highflyers in the industry, we can expect Candice LeRae, Shotzi Blackheart, Io Shirai, and Ember Moon to impress during the match.

NXT must allow the women to deliver some incredible moves just like they did during the ladder match on the go-home episode of NXT.

Along with that, Shirai had delivered a jaw-dropping moonsault from the top of the steel cage during last year’s WarGames, and she could end up doing something similar at WarGames.

To ensure that the fans get to witness some incredible action during the show, NXT must give the women a chance to show what they've got. This year’s WarGames could belong to the women of NXT, and they must grab the opportunity with both hands to deliver an epic performance.