Reasons You Should Never Compare Zlatan Ibrahimovic And Cristiano Ronaldo

Zlatan Ibrahimovic and Cristiano Ronaldo had gone head to head for the eleventh time in their career, over three decades! Its fair to say Ronaldo has had the edge over all their meetings.

Ibrahimovic has only been on the winning side once in his career. It came in a 1-0 win over Real Madrid for Barcelona in November 2009, where he replaced Thierry Henry in the final 14 minutes to fire home a winner at Camp Nou.

Otherwise, the 38-year-old has a miserable record against Ronaldo with five defeats and five draws.

The Friends Arena played host to one of the greatest showdowns of the decade one night, with Ronaldo’s hat-trick sending Portugal through to the World Cup at the expense of Ibrahimovic’s Sweden.

It was undoubtedly a blow to the big guy’s ego (Ibrahimovic) and might be one reason he’s so hard on Ronaldo. 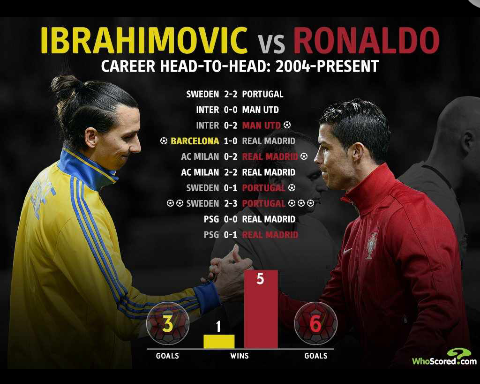 Ronaldo has now scored total number of seven goals in all their meetings by adding one to his goal last night against AC Milan while Ibrahimovic has scored just three goals.

3 Statements Stan Nze Dropped For Those Criticizing His Marriage

2 Wise Things to Do Before Giving Out Your Money to a Poor or Needy Person That You Don't Know.