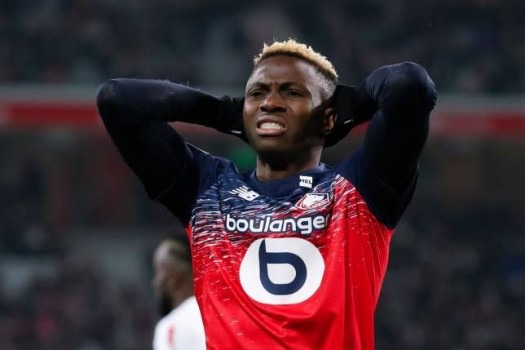 Former Inter-milan Player, Esteban Cambiasso has expressed his Displeasure on Victor Osimhen over his Change of Agent in the Midst of a Transfer Negotiations with Napoli

Just Last week, the Young Nigerian Striker Terminated the Employment of his Former Agent after Finding him Guilty of Unethical Dealings during Contract Negotiations with Napoli. His recent Action has not gone down well with Cambiasso who feels the 21 years old has complicated issues with Napoli over his Transfer. Osimhen's New Agent, William D'Avila is in charge of the Stiker's Transfer Dealings.

"If I too have changed as many agents as Victor Osimhen did, complicating a negotiation like the one with Napoli?Honestly not." Cambiasso said as per Italian Media house, AreaNapoli

I had my father, I trusted him; then my brother managed me. These things, in short , I did not do them."

"It is also true, however, that football has changed in some respects over the years .I have never behaved this way either. I, however, went to talk to the club alone or, at best, with my mother."

"That's right: once my mother came with me and, seeing that I wanted to raise the requests for engagement, she said to me: 'Beppe, leave it alone: ​​take what they have offered you, it's good money." He concluded

Napoli's Sporting Director recently came out to state that Osimhen's Proposed deal has become so complicated due to his Change of Agent.

According to Several reports, the current Osimhen's Agents has also opened talks with Manchester United and Liverpool.