What a season this had been in the English Premier League. With the caroronavirus pandemic causing many clubs to limit their spending on players, a lot of academy players in the traditional "big six" clubs have been given more opportunities in the first team setup and a good number of them have duly delivered. Here's an XI of academy graduates from the "big six" clubs in England who have impressed this season.

The easy choice here. After his excellent spell on loan at Sheffield United last season, he returned to Old Trafford as backup to David De Gea. However, as the season has progressed, he's been able to earn for himself more playing time as he's provided very strong competition for the Spaniard. He could very well take over the number one spot by next season.

Is there really a more versatile player than Bukayo Saka in the EPL? The Arsenal academy graduate can play on either flank of the defense, midfield and forward line. He's been one of the few bright sparks for Arsenal this season. Such a shame it will be if he's unable to make England's squad for the Euros.

Andreas Christensen is one player who's had a rollercoaster ride this season. He started this season as one half of the first choice centre back pairing at Chelsea and lost his place with the arrival of Thiago Silva. Thomas Tuchel's arrival with his preferred 3-centre backs defence has proven to be perfect for him. Nathaniel Phillip's was gotten on free transfer as a teenager by Liverpool in 2016. After spells with the youth team setup and loan system, he finally got his real first team opportunities this season as a result of the reds' injury woes in defence and he's duly taken it. Liverpool's defence may be much weaker without Virgil van Dijk but from the options available, he's cemented his spot as a starter.

It's a choice between Reece James and Trent Alexander-Arnold. Alexander-Arnold has had a subpar season by his own standards while James has been...well...James. Gareth Southgate thinks he is currently ahead of Alexander-Arnold in the pecking order. I think so too and so he makes this team.

Manchester United's academy graduate Scott McTominay, who has been impressive for Manchester United since his debut, easily takes the defensive midfield spot. Mason Mount has been excellent for the blues, carrying them even during their poor run of games while Phil Foden has taken up more responsibility for Manchester City and done so well. It's a very strong midfield trio.

Very easy choice here. United's second best player this season takes the left wing spot for himself in this XI

Callum Hudson-Odoi has been very impressive for Chelsea in his new wingback role. He may have found it difficult to get minutes under Frank Lampard but that aspect has improved under the new manager, along with his performances.

Who else but the best striker in the league? Harry Kane is poised to score 20+ goals for 5 consecutive seasons. That's pretty impressive for someone called a one-season wonder by many in his breakout season a few years ago. 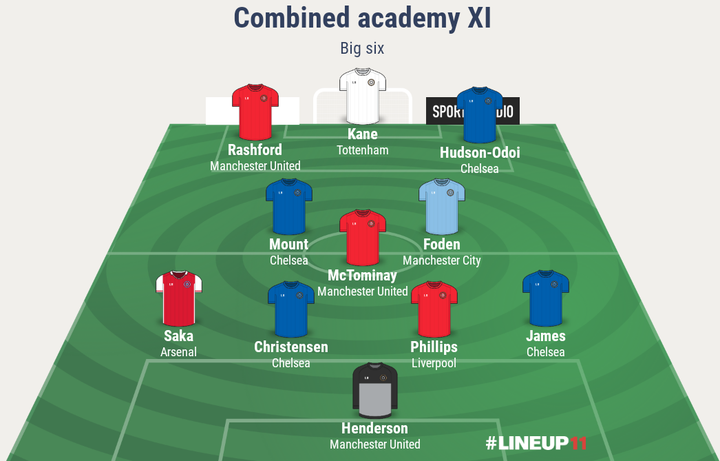 Is Your Relationship Worth Saving, Here are Signs to Know

When The Love is Gone, 15 Gestures to Bring Back The Love

Checkout 10 people who visited their own funerals

Finally, A Date Has Been Set For "The Fight of The Century" Between Anthony Joshua and Tyson Fury.