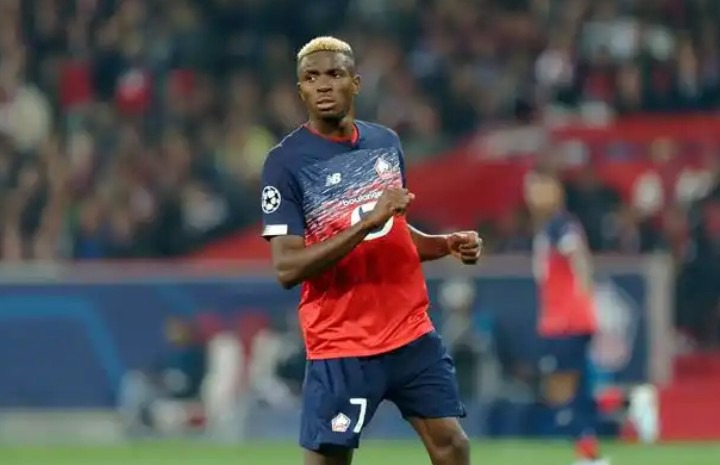 Man Utd made contact with Victor Osimhen in attempt to hijack Napoli transfer This will make him most expensive Nigerian player.

reportedly contacted Victor Osimhen’s agent as the Red Devils look to make a move for the Lille striker. United have been linked with a summer transfer for Osimhen, though Serie A giants Napoli are thought to be leading the race.

It’s reported that Osimhen is in advance negotiations with Napoli, though it seems the Red Devils have not given up hope just yet. Respected journalist Ciro Venerato spoke to CalcioNapoli24 about the race for the player, and claimed that United contacted Osimhen’s agent recently.

Venerato said: “Manchester United phoned Osimhen’s new agent to find out if he had signed with Napoli.

“If an offer from United comes, there would not be many possibilities because they have an economic power superior to that of Napoli.” United have been linked with a host of names ahead of this summer’s transfer window, including Jadon Sancho and Harry Kane. And Red Devils boss Ole Gunnar Solskjaer is hopeful that he will have money to spend if he wants to.

“Manchester City and Liverpool, the last couple of seasons, have put the standard where it should be to win the league. “We’ve developed over the season and you’re thinking, ‘Yeah, we’re not too far away’ and I’m very happy with the squad.

“If there are any good deals to be made and players to make us better of course we might have to spend some money on that but the squad is great to work with and it’s moving in the right direction. “We’re still not where we want to be, close enough to challenge for the Premier League trophy but we take one step at a time.

” United may feel they need to strengthen if they are to challenge for next season's title. The Red Devils beat Crystal Palace on Thursday night, though remain fifth in the table with just two matches left to play.