By ZephaniahBethelKalu (self media writer) | 2 years ago

There comes a day in a person's life that he stands up to face his fears. He puts the past behind, draws strength from it and tackles the present. That is the story of Arsenal and Arteta in their victory against Pep Guardiola's Manchester City. After every game, there are talking points. Here are prominent talking points from Arsenal's victory 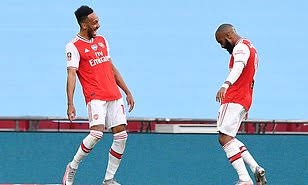 Arsenal were brave in their challenge against Manchester City as they dared to contest possession with Manchester City and even had opportunities to seal the game in the first half with Aubameyang coming close to scoring a second goal in the first half but poor decision making let him down. City were stunned by Arsenal's bravery as they had to struggle to balance defense and attack. Arsenal are traditionally known to keep possession and they dared to do so. Arsenal were strong at the back and did not shake, taking the game to Manchester City and defending when it was necessary. It was a first half performance that Arteta and his team would be proud of Skodran Mustafi, David Luiz and Miles did well to cut off Mahrez and Mendy's crosses, giving less chances to Gabriel Jesus and Raheem Sterling. Arsenal's first half defensive performance was reassuring and a reflection of what Arteta has been working on. Arteta started four players in midfield, to cut off Silva's and De Bruyne's passes and it worked well in the first half for the Gunners

City are Vulnerable When they are losing:

The first half showed how vulnerable City can be at the back, especially with Benjamin Mendy and Walker trying to join the attack and Arsenal exploiting the spaces through Nicholas Pepe and Miles. City can be loose at the back when they are behind and they seem to press too high, leaving spaces for counter attacks as their full backs are part of the pressing game. It also showed in Aubameyang's second goal as Laporte and Garcia gave him enough space to race into the box and slot past Ederson. City needs to balance defense and attack when they are losing Arsenal's poor decision making in attack leaves much to be desired. Even in other games, if there are many things that Arsenal has been guilty of, one of them will be poor decision making in front of the opponent's goal. On the night, Aubameyang had the opportunity to double the lead for Arsenal but he chose to pass the ball, allowing Laporte and Eric Garcia time to recover. Miles had opportunities to cross into the box but his efforts went wide. In such high profile games, a chance is good enough to change the game On a good day, David Luiz can be a blessing. The former Chelsea defender was in his best form as he put his body on the line to block City's deluge of attacks. The introduction of Phil Foden and Rodri added impetus to the City midfield as they mounted pressure on the Arsenal defense who were resilient and stuck to Arteta's defensive tactics.

What else did you notice in the game? 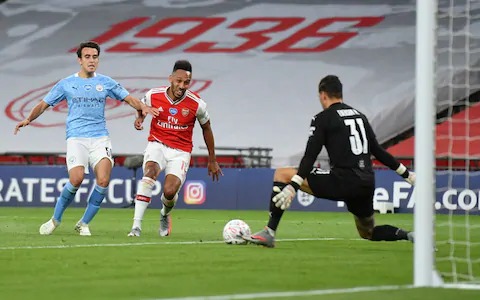