Where Are They? The 2007 World Cup-winning Golden Eaglets

By BukolaNews (self media writer) | 1 year ago 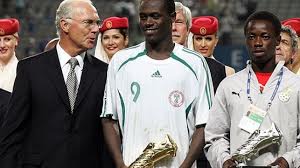 On September 9, 2007, the late Yemi Tella led a team of youngsters to South Korea to win the FIFA U-17 World Cup for the third time after previous wins in 1985 in China and 1993 in Japan.

Like their previous winning stars, Nigerians had hoped that most of the youngsters would form the bulk of the Super Eagles later in their careers.

But nine years down the line, not one single member of that team is playing for the Super Eagles — although, to be fair, a few have been in and out of it.

None of them, still, is playing for a major club anywhere in the world, with the bulk plying their trade in the Nigerian league while some are playing in obscure leagues overseas.

A check on their counterparts from other countries ended up in national teams and big clubs in some of the biggest leagues in the world: James Rodriguez of Columbia, playing for Real Madrid since 2014; Fábio Henrique Tavares of Brazil, who now plays for AS Monaco; German midfielder Toni Kroos, now with Real Madrid and now a senior World Cup winner with the national team; Bojan Krkic, with Stoke City after several years at Barcelona.

Of the Nigeria’s 21 players at the 2007 World Cup in South Korea, the whereabouts of nine are unknown.

After his superlative performance at the tournament, Aji-boy, as the commentators pronounced his name, was called up to the Nigerian U20 team in December 2008 for the 2009 African Youth Championship in Rwanda. He was also a member of the Nigerian team to the 2009 FIFA U-20 World Cup in Egypt.

He was Nigeria’s starting goalkeeper for the 2012 Olympic qualifiers and All Africa Games qualifiers under Coach Augustine Eguavoen. He presently plies his trade with NPFL side Warri Wolves.

Featured briefly in the U-20 and U-23 Olympic team, Okanlawon failed to take his game to the zenith but was seen in and out of clubs in the domestic league in the country.

Despite being highly regarded for several years, Okanlawon got limited playing time during the last three seasons. At Sharks FC, he was second-choice goalkeeper behind Danladi Isah, featuring in only three games during the 2014 NPFL season.

The Osogbo, Osun state-born player is currently playing for Becamex Bình Duong in the V.League 1 in Vietnam, following a series of unsuccessful trials in North Africa.

He also played for CSKA Moscow and Esperance of Tunisia. before moving to Vietnam in 2011. He featured briefly in theU-23 All Africa Games qualifier in April 2011, scoring a brace in the 6-1 win over Liberia.

Currently with Llaneros FC in Colombia.

Nothing has been heard of him since the tournament.

After Udoh’s several failed sojourns abroad with clubs such as Athletico Madrid, Olympique Lyon and Olympiacos FC, he settled down in the national league, where he is currently playing for Sunshine Stars of Akure as a central defender.

The central defender’s career was cut short by a deadly car accident in 2009, on his way to the Nigeria U20 camp.

Osanga was with the Nigeria national U20 football team at 2009 FIFA U-20 World Cup in Egypt, and was called up to the senior team for the first time in August 2010 for a friendly in South Korea.

In the 2013/2014 season, he played for White Star Bruxelles in the Belgian Second Division. He us currently with Shooting Stars Sports Club of Ibadan.

The forward had a brief stint with Étoile Sportive du Sahel in Tunisia. He played for Spain’s UD Salamanca but rarely played over the course of two second-division seasons.

He also appeared in the colours of Cádiz CF, FC Cartagena and CE L’Hospitalet and Sunshine Stars. He is currently with Spanish second-division side, Merida.

Chrisantus was the top scorer at the 2007 FIFA U17 World Cup, with seven goals (all from his right foot); he was also awarded the adidas Silver Ball. He featured at the Egypt 2009 U-20 World Cup.

He currently plays for CF Reus Deportiu in Spain, returning to the European country after departing Las Palmas. Not the stuff expected of a man originally viewed as the answer to a senior striker in the mould of Rashidi Yekini.

In late 2007, he was included in the World Soccer’s ’50 Most Exciting Teen Footballers’ list and in March 2008, he was featured by InsideFutbol.com in an article on young African footballers, alongside the likes of Emmanuel Adebayor, Mario Balotelli and John Obi Mikel.

In January 2009, he made Goal.com’s list of 10 African Players to Watch, and The Times’ Football’s Top 50 Rising Stars.

He was included in the Nigerian senior team squad by German coach Berti Vogts for the 2008 Africa Cup of Nations, but a groin injury prevented him from participating in the tournament.

plays for FC Chornomorets Odesa in the Ukrainian Premier League.

The Minna, Niger state-born player is currently with Niger Tornadoes FC. He also played for Helsingborgs IF in Sweden and AEK Larnaca.

In December 2008, he was called up to the Nigerian U20 national team for the 2009 African Youth Championship, and he scored a goal against Egypt. On March 3, 2010, he earned his first call-up to the Super Eagles but never earned a place in the squad.

Haruna plays for FC Astana in the Kazakhstan premier league on loan from FC Dynamo Kyiv. He has been in and out of the Super Eagles, despite playing at the 2010 FIFA World Cup

Content created and supplied by: BukolaNews (via Opera News )