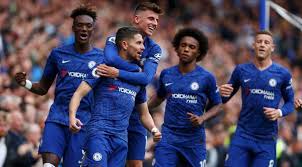 Chelsea is one of the richest team across Europe, and are known for paying a good sum of salary to their players to satisfy them weekly.

The Spanish international is earning a whooping salary of £290,000k per week.The figures are from an original source who have access to peremier league clubs finance. You will can't know how much a player is really earning due to some bonuses they recieve based on their performance in games.

Here is a compiled list of Chelsea player wages .

4.jorginho - £110,000 per week .The mieldfielder is earning this much with low performance in the club.

6.Mateo Kovacic- also earning £107,000k per week . Joined Chelsea on loan from real Madrid but now have a permanent deal with the club after a great season at the club.

9.Pedro - planning to leave the club the summer.He has seriously drained the club with a bad season at the club.He is earning £100,000 weekly.