By iworldreporter (self media writer) | 2 years ago

Chelsea FC had an impressive FA semi-final win over Man United FC last night as they cruise over the Red Devils scoring 3goals past them in what looked like a one-sided game. It was all to play for as Chelsea gave a good account of themselves having more of the ball possessions and creating plenty of chances. 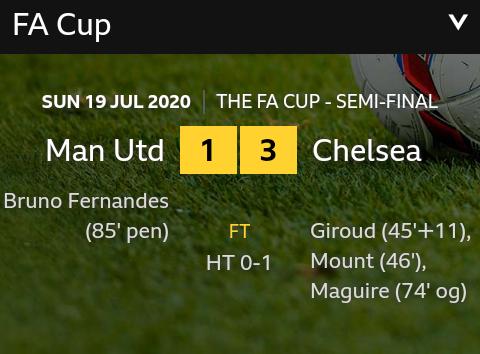 Man United who had been on fine form in the Premier League seems to have lost the rhythm following to the build up to the game last night. One man who would have himself to blame is Man United Goalie - David DeGea who was used in place of Romero who had been an unused goalkeeper in as many games.

The Spain International was at fault for all three goals as the Red Devils lost out on place in the FA final at Wembley Stadium. Over the past 18 months or so David DeGea had made more goalkeeping errors which are evident in some of the matches he had played in. Questions will continue to be asked of the man Ole Gunnar Solskjaer continues to describe as "the best goalkeeper in the world". 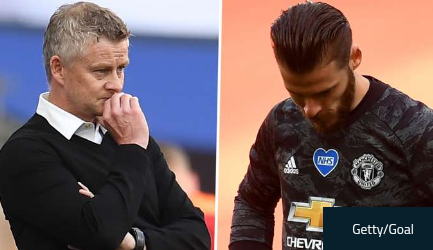 What does this means to the Man United hierarchy as another chance at winning a trophy eludes them considering how Solskjaer has been building an attacking force that will rival the rest clubs in the premier league. It seems unexpectedly the weaker link has been DeGea who is beginning to cost the club that has shot him to greater heights in the football business.

1. December 22 vs Watford: Allows Ismaila Sarr's shot to bounce through his hands

2. March 1 vs Everton: Clearance bounces in off Dominic Calvert-Lewin

3. June 19 vs Spurs: Fails to stop shot from Steven Bergwijn

4. July 4 vs B'mouth: Beaten at near post by Junior Stanislas

5. July 19 vs Chelsea: Partly at fault for three goals 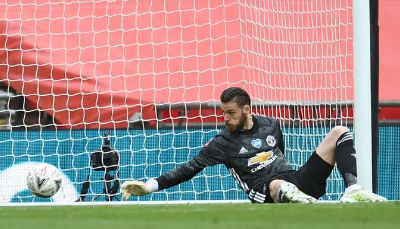 De Gea knows his time as first choice goalkeeper will be over considering how Man United's on-loan goalkeeper at Sheffield United Dean Henderson continues to impress well. Sadly, if things do not improve Solskjaer may have to replace him quickly in order to curb his shortfalls.

2. Chelsea have reached their 14th FA Cup final. Only Arsenal (21 including this season) and Manchester United (20) have made the final on more occasions.

3. Manchester United have been eliminated from the FA Cup by Chelsea for a sixth time (including three of the last four seasons) - only Arsenal (seven) have knocked the Red Devils out of the competition on more occasions.

4. This was Chelsea's first victory against Manchester United since the 2018 FA Cup final - the Blues were winless in six matches across all competitions against the Red Devils prior to today (D2 L4). 5. Chelsea are the first side to beat Manchester United since Burnley in the Premier League back in January, ending United's 19 game unbeaten run in all competitions.

6. Mason Mount became the first Englishman to score for Chelsea at Wembley since John Terry in the 2015 League Cup final versus Tottenham.

7. No player has scored more goals for Frank Lampard in his managerial career than Mason Mount (18 - level with Harry Wilson).

8. Since his Manchester United debut in February, no Premier League player has been involved in more goals across all competitions than Bruno Fernandes (17 - nine goals and eight assists).

9. Manchester United have both taken (19) and scored (15) more penalties than any other Premier League side this season in all competitions.

Anyways, it still remained if DeGea can cut out the errors which will go a long way to deciding his future at Man United FC.

Content created and supplied by: iworldreporter (via Opera News )