The Blaugrana have lost both of their group stage games 3-0 and are in danger of being eliminated from the competition.

Barcelona is off to their worst start in the Champions League, with a 3-0 loss to Benfica putting them on a six-goal deficit in back-to-back losses to start the competition. 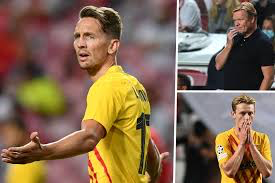 Ronald Koeman's side are presently at the bottom of Group E and face an early exit from the competition.

Darwin Nunez was allowed to waltz into free space in the box and fire a shot for Benfica after just three minutes, and the Portuguese club added two more goals before Barcelona's Eric Garcia was sent off.

In all competitions, Koeman's side has only won one of their last five games.

"It's difficult to accept the final conclusion," Koeman told reporters. "It's not the outcome we saw on the field. Despite [falling down early], I believe the team performed well until the score was 2-0. We had several clear scoring opportunities.

"We should have defended the first and second goals better, in my opinion. Although soft is a word, there are numerous teams that are physically superior.

"I'm not going to go into detail about this team's skill level. Everyone is aware of Barca's current issue. It's impossible to comment on a team that isn't the same as the one from the previous year. It's clearer than water to me."

With a spending cap one-eighth that of rival Real Madrid this year due to the financial crisis, Barcelona was bound to have a turbulent season.

However, crushing 3-0 defeats in the Champions League to Bayern Munich and Benfica, as well as a disappointing start to their La Liga season, have highlighted how unusually difficult this season could be.

Barcelona's debt crisis could take years to resolve, so fans should expect a long-term rebuilding process.