Which Of These Players Would Have Won The Ballon d'Or.

It was recently announced that the Ballon d'Or for the year 2020 is be cancelled. A lot of players wil be hoping to win the award having performed very well for their clubs.

I will be listing some players who would have won the award.pls let me know who you think we win the award if it was not cancelled. 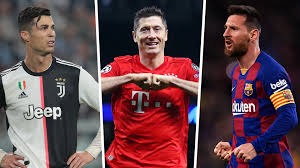 The France national was phenomenal for Madrid this season helping them to secure the Laliga trophy. The striker registered 21 goals and 8 assist. Real Madrid is still in the champions league and will play Man City for the chance to play in the quarter finals. Do you think Benzema would have won the award. The Polish striker have been superb this season. The 31 years old striker scored 34 goals to lead Bayern Munich to the bundesliga title and he is also the highest goal scorer in this season champions league with 11 goals and his team are favorites to progress the quarter finals after beating Chelsea FC 3-0 in the first leg. Do you think he would have won it. The Portuguese star has been his excellent self this season. Having previously won the award five times, he most likely would have won it this year. His team, Juventus is top of the Seria A table and Ronaldo has scored 28 goals in Seria A this season and his team is still in the champions league where they will play Lyon in the round of 16 second leg. Last year winner is definitely a contender this season having scored 25 goals and registered 21 assists in Laliga this season though his team missed out on the trophy. Barcelona is still the champions league as they hope to beat Italian club Napoli to qualify for the quarter finals. Who do you think would have won the Ballon d'Or let us know in the comments section.