By Legiitwriter (self media writer) | 2 years ago

There is no greater joy than having one big family who loves and support the same thing. I have been a Chelsea fan for more than twenty years and all I've ever wanted was to have a family where all of us will be supporting Chelsea. Infact, my love for Chelsea was so great that I made it a mission to groom all my children into supporting my club and at first I thought I succeeded until this happened.

My name is John and I have been a Chelsea fan for more than two decades now. I married a woman who supports and cherishes the club as much as I do.

When we had our first child, we named him Frank, in honor of the blues greatest ever player, Frank Lampard. I made absolutely sure that my son grew up to become a blues fan too by buying him jerseys and dvds of the very best of Chelsea.

He grew up nicely and supported Chelsea and we were all one big family. When Chelsea wins, we celebrate like it's Christmas and when they lose we most likely go to bed on empty stomach. Everyone is so sad to eat anything.

When my son turned 18 and got admission into university, he came home after two semesters and was wearing a United's jersey. I was surprised. So when I asked him why he was wearing United's jersey he said he is now a Man United fan. I didn't raise my son to be a red devil. I cannot accept that. I thought it was a joke until it was time for Chelsea to play United that evening. United scored and he was jubilating, shouting "goal goal goal" like a mad man. I have never been that angry in my life.

When he was leaving for school the next morning, I saw him posting "Up Man U, we beat Chelshit" on his whatsapp status and I told him to leave that club and join Chelsea or else I will show him what I'm made of. He laughed so hard and told me, No. I said okay, and gave him money for transportation back to school. On getting to school, I was supposed to send his tuition fee but I refused. Infact since that day I have not given him one naira of my money and I will not, unless he leaves my enemies and join me. What kind of a son isn't loyal to his family. My wife and I have been praying for him to find his way back. 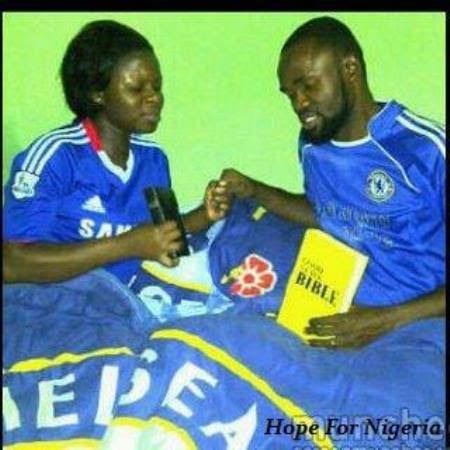 But if he refuses, I will show him pepper.

Content created and supplied by: Legiitwriter (via Opera News )