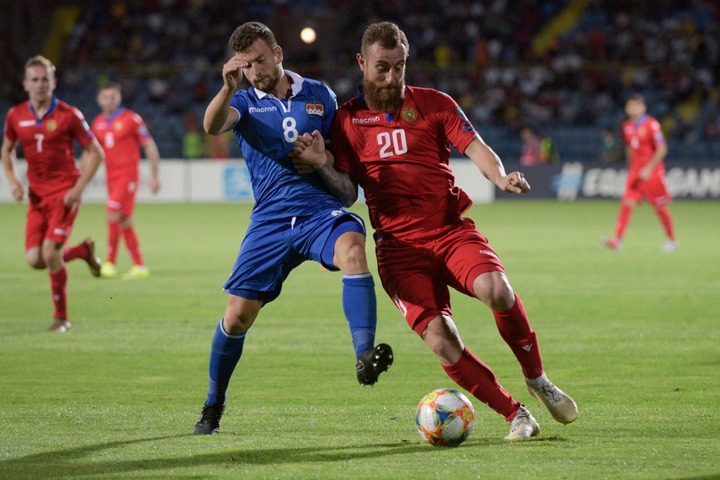 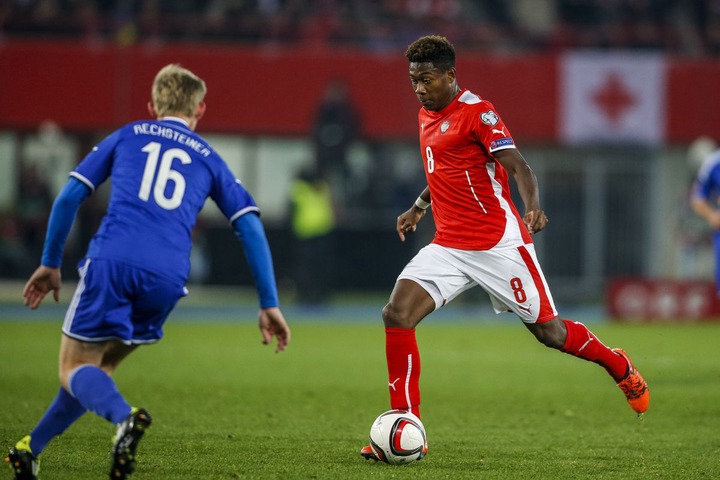 The last set of matches to determine which countries deserve tickets for next year's World Cup in Qatar will be played this November and a clear picture is already beginning to emerge.

Eight more teams are set to join the pair of Germany and Denmark who qualified in October after match day 8 of the round robin group qualifiers.

Teams like Serbia, Portugal, Sweden, Spain, Italy, Switzerland, France, Ukraine, Belgium, Czech Republic, Netherlands, Norway, Russia, Croatia, England, and Poland will be engaged in fiesty match-ups this weekend and on November 15 to fight for the lone automatic slots in those 8 groups left before the play-offs.

A further 3 teams will join the automatic qualifiers after 10 group runners-up join 2 UEFA Nations League finalists to slug it out early next year.

With only 14 teams emerging at the end of the day, it is clear that there will be winners and losers -- those who will be counted worthy to be at the Qatar party by virtue of their teams' qualification and those who will not be so lucky.

It is by no means exhaustive, but we unveil in this report at least 13 well known stars who, through no fault of theirs, will not be at the first World Cup that would be staged in winter. 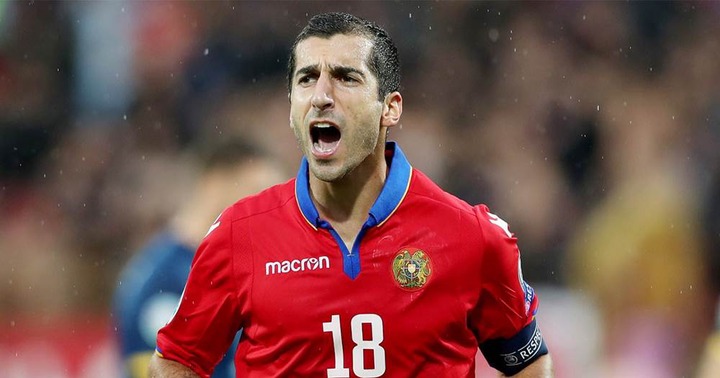 Henrikh Mkhitaryan is one of Europe's prominent faces that will be missing from next year's World Cup.

The former Manchester United, Arsenal player who now stars for Italian side, AS Roma unfortunately finds his country locked in a group where Germany has already picked the sole ticket.

It is unlikely that his team would be able to upstage Romania and North Macedonia (already ahead in Group J) in the race for a play-off place with just 2 matches left to play. 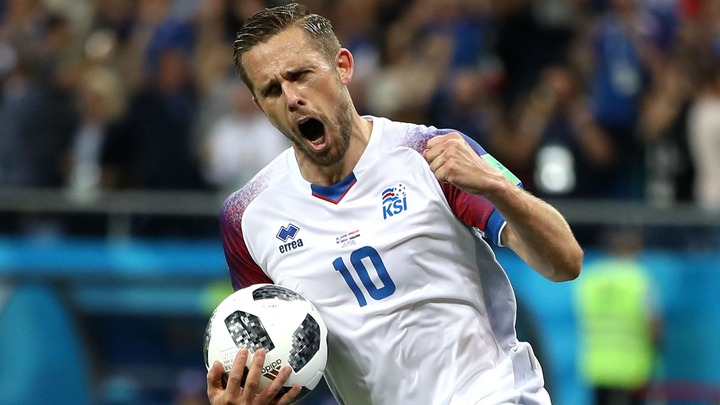 Gylfi Sigurdsson is one of Iceland's best known players with 78 caps and 25 goals under his belt.

He is part of a generation of players who have put Iceland's football on the world map with appearances at the European Championship and the World Cup in the last 5 years or so.

The Everton star now, however, finds it might be an uphill task for his team to repeat the heroics of the past as his country struggles in current qualifiers for next year's World Cup.

With 8 points and standing in 5th place in Group J, Sigurdsson knows his plans to appear in a second consecutive World Cup after Russia 2018 could be a pipe dream. 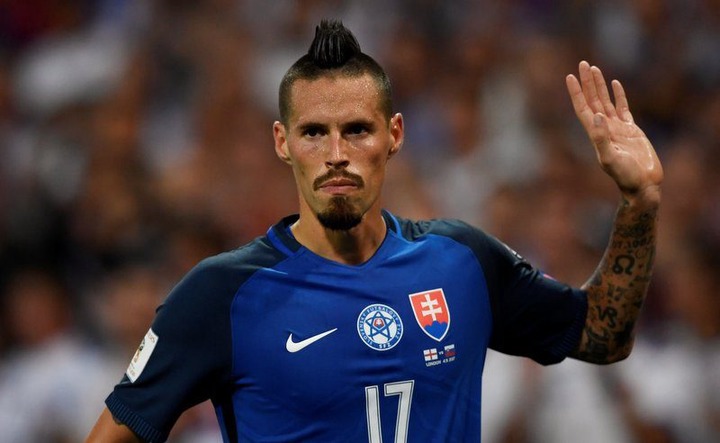 Marek Hamsik may be Slovakia's all-time top scorer with 26 goals from 134 international games but it appears his ambition to play at the World Cup may not be realised, after all.

After a good outing at the Euro 2020 Championships, Hamsik who is also captain of his country's national team would have loved to cap his glorious career with an appearance at football's biggest showpiece now he is ageing and about to retire.

But Slovakia's not too impressive showings in the Group H qualifiers where they sit at third place behind Croatia and Russia will now ensure that that noble dream is not realised.

At 34, it is a painful reality for the Trabzonspor midfielder. 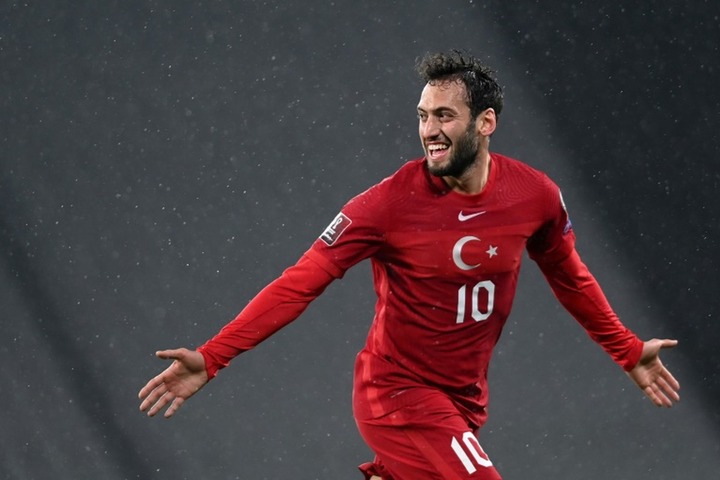 Hakan Cahanoglu is one man the world would have loved to see at the Qatar 2022.

The Inter Milan star who has been compared to Mesut Ozil (another player with Turkish origins) because of his vision on the ball, technique, passing range as well as his dead ball abilities, would no doubt have been a cynosure of all eyes at world football's biggest stage.

But with Turkey's topsy-turvy form in the ongoing qualifiers, that ambition may not be realised.

The 27-year old who already has 14 goals in 64 outings has also shown his desire to make the mundial, scoring 3 goals so far in the qualifiers.

But the fact that the Netherlands and Norway are in pole position to nick both the Group G automatic and play-off places now further dims his chances. 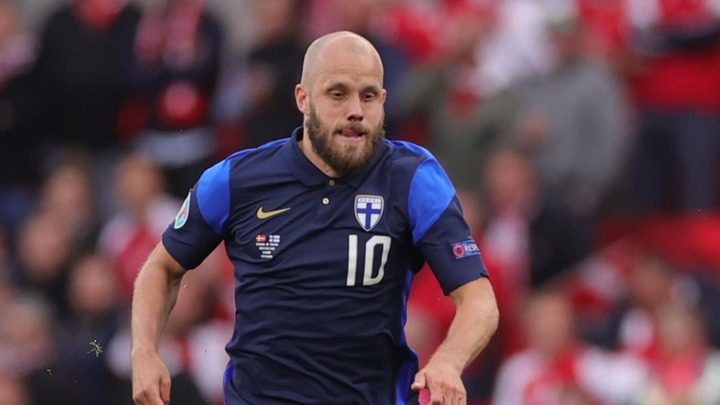 Teemu Pukki is undoubtedly a big name in Finnish football, having chalked up 33 goals in 98 international matches.

The Norwich City star was a key figure in Finland's qualification for the last Euro 2020 Championship and would have wished his country weren't so far behind in the current qualifiers for the Qatar 2022 FIFA World Cup.

But with current world champions, France and Russia 2018 finalists, Croatia dictating the pace in Group D, Finland and Pukki may have to wait another 4 years to attempt another shot at qualification for the World Cup. 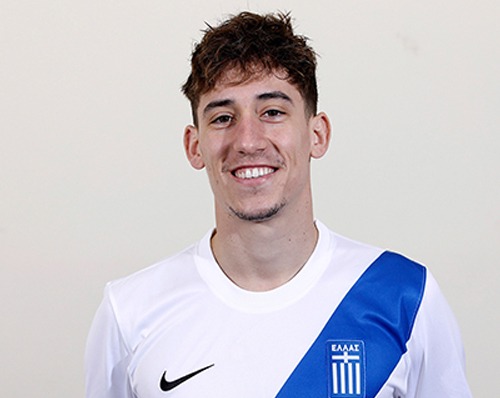 Kostas Tsimikas stars for top English team, Liverpool. He is 25 and probably one of Greece's fastest growing faces on the international stage.

Featuring at the World Cup would no doubt have helped his profile. But in a group where Spain and Sweden are already set to annex first and second spots, there is a real chance that a World Cup appearance for Greece and Tsimikas may not be realised this time. 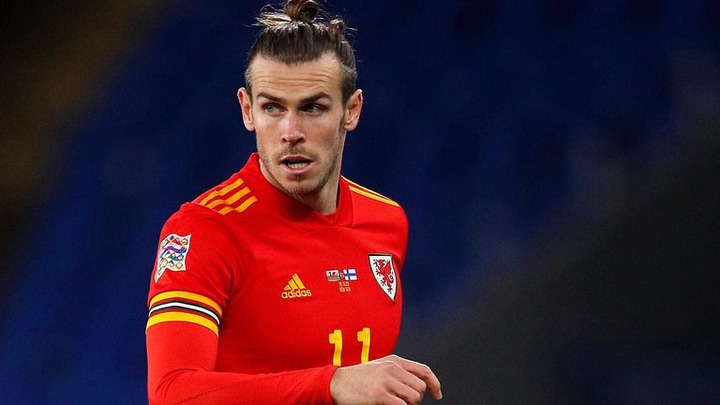 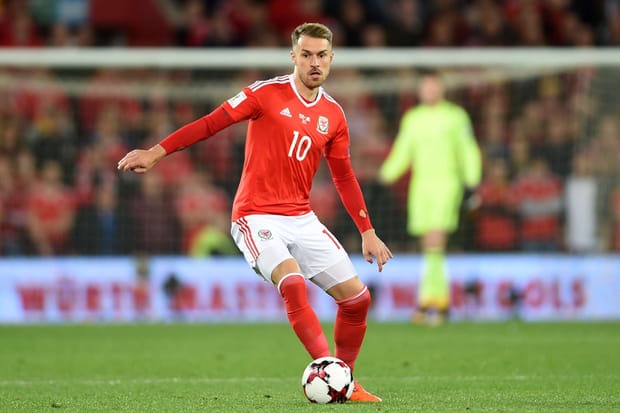 The duo of Gareth Bale and Aaron Ramsey are facing the prospect of missing out of next year's World Cup unless they can win their next 2 matches against Belarus and Belgium.

Inability to do that puts them in the category of a Ryan Giggs, another Wales legend who, despite his incredible success at club level with Manchester United, was never able to play at the World Cup.

Bale, 32, who captains Wales is also that country's all-time scorer with 36 goals from 99 caps.

Ramsey who currently stars for Italian side, Juventus has also proved to be a major force in Welsh football over the years with 18 goals from 68 outings.

At 32 and 30 years respectively, both players know they can't wait another 4 years to fulfill their dreams of featuring at the World Cup. 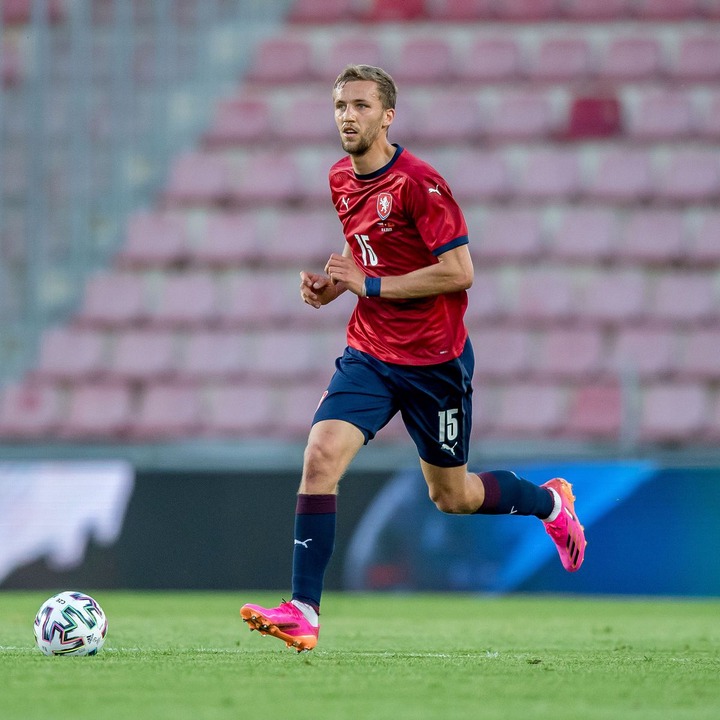 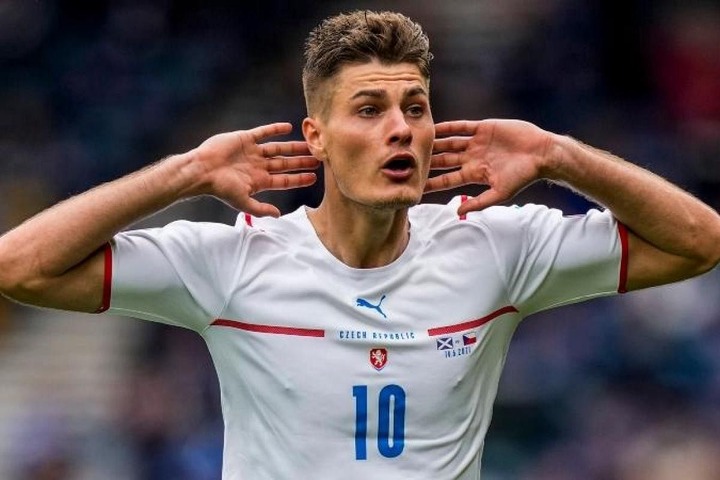 Tomas Soucek and Patrick Schick are no doubt currently two of the best players the Czech Republic can boast of.

Soucek who plies his trade with English Premier League club, West Ham United has already scored 3 goals in the ongoing qualifiers but with a Gareth Bale-led Wales breathing down their neck for a slot in the a play-offs, nothing is sure for the 26-year old.

The same fate could before Patrik Schick, his teammate who was a revelation at Euro 2020.

Schick had got everyone talking after he bagged 5 goals -- one of which was adjudged goal of the tournament -- at the Euros last summer.

Schick may not now be able to replicate his Euro 2020 heroics at the quadrennial global showpiece if his country fall short of qualification requirements at the end of the day.

His 2 goals so far scored in the round robin group games may prove grossly inadequate at the end of the day. 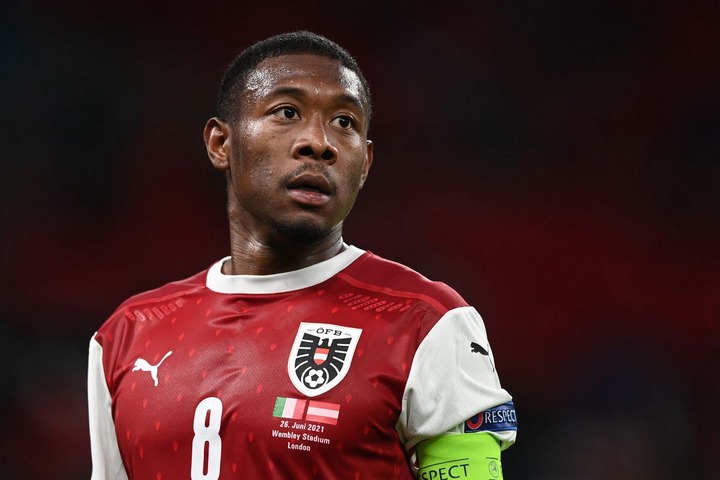 David Alaba has had a wonderful club career.

The defender with Nigerian roots is probably one of Austria's most decorated players ever with several titles to his name.

Several years of playing for German Bundesliga giants, Bayern Munich established him as one of the most sought after hatchet men of the modern game.

His recent move to Real Madrid is a proof of that much vaunted pedigree.

With 14 goals in 90 international games for his country, Alaba aims for even greater glory with his adopted country.

And an appearance at the World Cup would have served as an icing on the cake.

But flung far down in the European Group F, where Denmark have already picked the only automatic ticket, and with Scotland and Israel jostling for a play-off place, Alaba is resigned to fate that he will not be at next year's World Cup in Qatar.

And as for Marko Arnautovic, a chance to feature at the World Cup went up in smoke the moment Austria could only manage 10 points from 8 qualifying games.

The Bologna forward, 32, who is rated one of Austria's most prolific strikers of all time with 29 goals in 94 caps may not now be able to add to his tally at football's biggest stage. 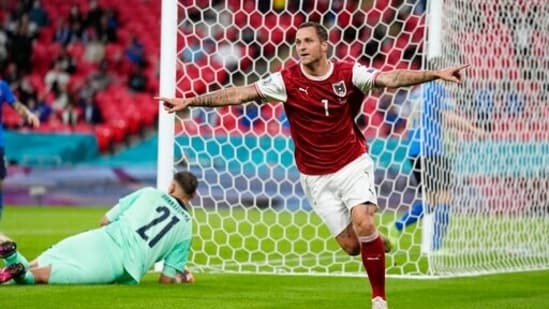