By sire_dee (self media writer) | 1 year ago

C. Ronaldo scored a brace in yesterday's night match between Juventus and Lazio to move to 30 goals this season. The 35 years old iconic Portuguese superstar help the Biaconni faithful to move closer to their ninth successive scuddetto truimph, having topped their closes opponent or rival with 8 points it a matter of time before they are crowned the champions of Serial A, of which the Thursday matches maybe a decider.

The former Madrid hero has now become the only player to have scored 50 or more goals in three different Top leagues in Europe, having scored 118 times in 294 appearance for Manchester United of England, 450 goals for Madrid in 438 Appearance and 50 goals in just 61 appearance for the old ladies (Juventus).

Furthermore, the 50 goals in Just 61 apps has made Ronaldo the fastest player to score halve a century goal in the league history...wow! Supernatural fit. 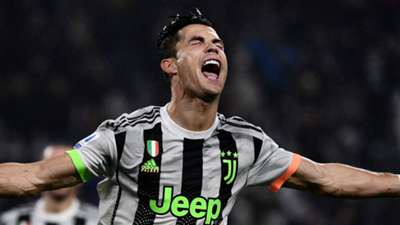 Albeit, C. Ronaldo did not start the season in an usual electric form but he is now in his best again, there has been some injuries concerns and fallout with the Juventus coach Sarri but all is now in the past.

The match between Juventus and Lazio is more than battle for 3 points but also the battle for the highest goalscorer between C. Ronaldo and Lazio's hot striker Ciro Immobile, the latter was topping the scoring charts with 1 goal prior to the match and that alone make the context a must watch match. The first half ended in stalemate with Immobile being the closest player among them whom should have gotten on the score sheet having hit the bar post with a thunderbolt strike with Ronaldo being denied by the Lazio Goalkeeper.

The second half started in hot pursuit of goal between the two teams but after 6 minutes into the second half C. Ronaldo won a penalty after a Lazio player handle the ball with his hand inside the 18 yards though with the help of Video Assistant Referee (VAR) recall, Ronaldo was never going to be denied this time as he placed his shot in the top corner of the post leaving the keeper no chance for a save even after guessing the right place.

The Portuguese superstar scored his brace in space of three minutes after a brilliant assist from Dybala leaving Cr7 to prod into an empty net with a tap in. The brace Ronaldo scored means he has now become the highest goal scorer of the League but he was soon to be denied that as Immobile won a Penalty of which he converted to also joined Ronaldo in 30 goals becoming the fifth Italian player to reach the mark. However, the first goal Mark Ronaldo's 50 of the league competition and the second his 51.

Ronaldo will now have his eye on the European golden boots has his just 4 goals from equaling Bayern Munich star Lewandowski.

So now what do you have to say about this 35 years old superstar?

Is he declining or Flourishing?

Content created and supplied by: sire_dee (via Opera News )