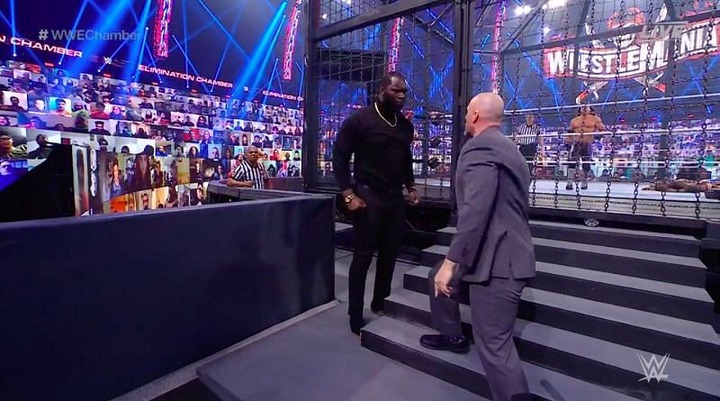 Sami Zayn was one of the six participants in the SmackDown Elimination Chamber match last night. He came out with his documentary crew to the ring, which stood just outside his Elimination Chamber pod. Unfortunately for Zayn, an official immediately ejected the crew, leaving him frustrated.

Later in the night, the RAW Elimination Chamber match saw AJ Styles coming out with Omos, who stood outside The Phenomenal One's pod for a brief period of time. Zayn wasn't happy with WWE allowing Omos to be at Styles' side, especially when his documentary crew wasn't allowed at ringside, earlier in the night. Check out his tweet below:

Sami Zayn was determined to come out of the Elimination Chamber with a win. When he made his entrance for the match, his documentary crew accompanied him to the ring but was quickly told to leave by the official.

This didn't sit well with Adam Pearce, who yelled at Omos and ordered him to leave the spot immediately. As Styles screamed helplessly at Omos to stay, the giant left for the back in a fit of anger. In the end, AJ Styles was pinned by Drew McIntyre, and The Scottish Psychopath thus retained his WWE title belt.