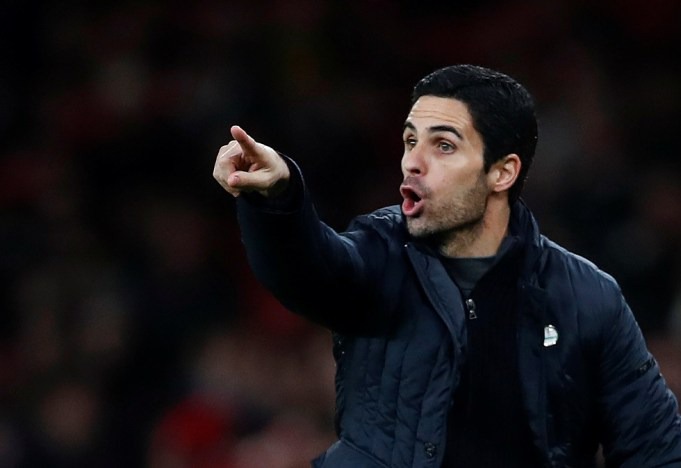 Arsenal Football Club is an English professional club based in Islington, London. The club was formed in Woolwich in 1886 as Dial Square before it was shortly renamed to Royal Arsenal, and then Woolwich Arsenal in 1893.

They became the first southern member to be admitted into the football league in 1893, having spent their first four seasons solely participating in cup tournaments and friendlies. In 1914, the club proceeded to shift their home base to Highbury and decided to simply call themselves Arsenal.

They finished the 1915 season, fifth in the Second Division but was able to rejoin the First Division at the expense of their rivals, Tottenham Hotspur when football resumed after the First World War. Since that time, they have not fallen below the first tier of the English football system and hold the record for the longest uninterrupted period in the top flight.

Arsenal have employed 20 permanent and 8 caretaker managers since 1897. Stewart Houston managed the club in two separate spells as caretaker, while two Arsenal managers, Herbert Chapman and Tom Whittaker died on the job.

Arsenal managers past and present 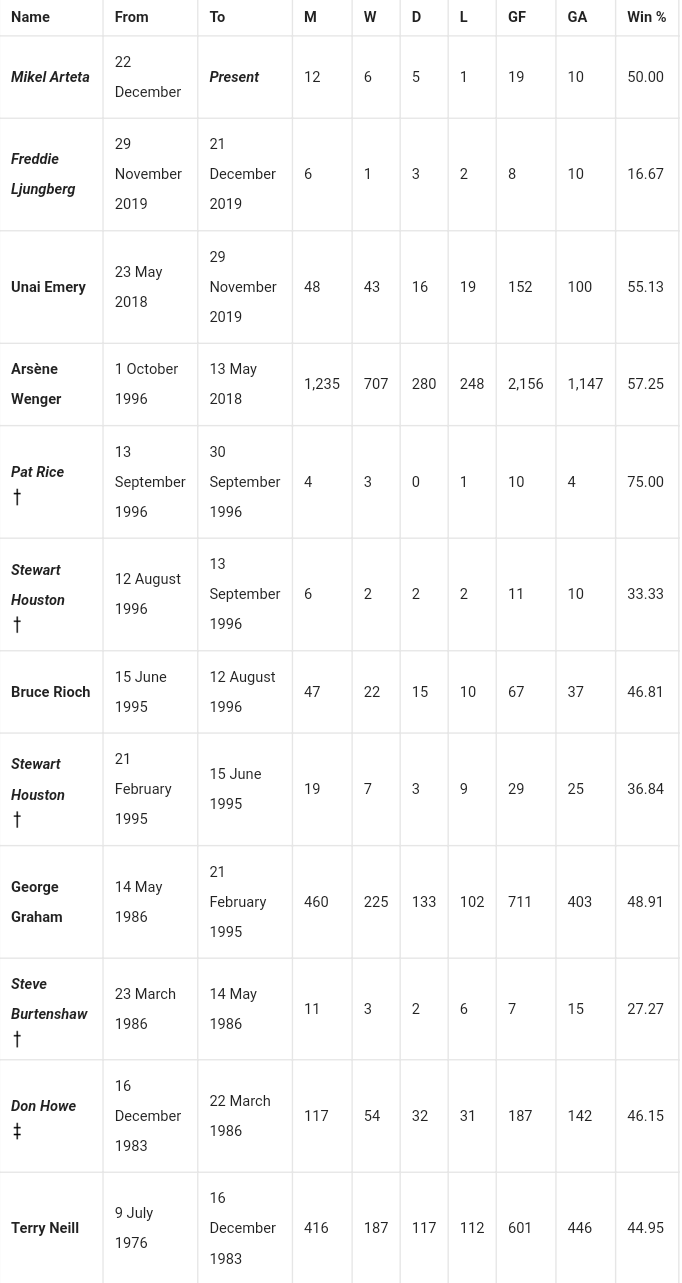 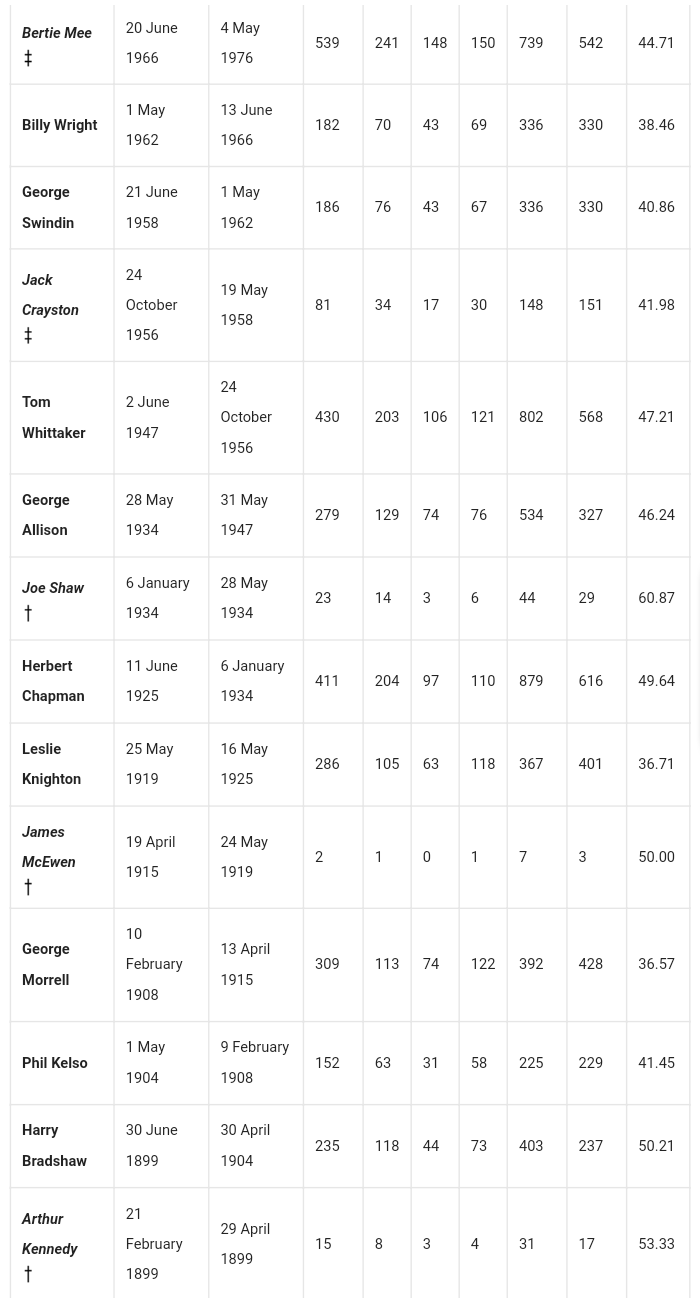 The most successful person to manage Arsenal is obviously Arsene Wenger. During his 22-year reign at North London, he won three Premier League titles, seven FA Cup and seven Community Shields between 1996 and 2018.

The Frenchman is the club’s longest-serving manager surpassing George Allison’s record of 13 years in October 2009.

Arsenal managers with most honours 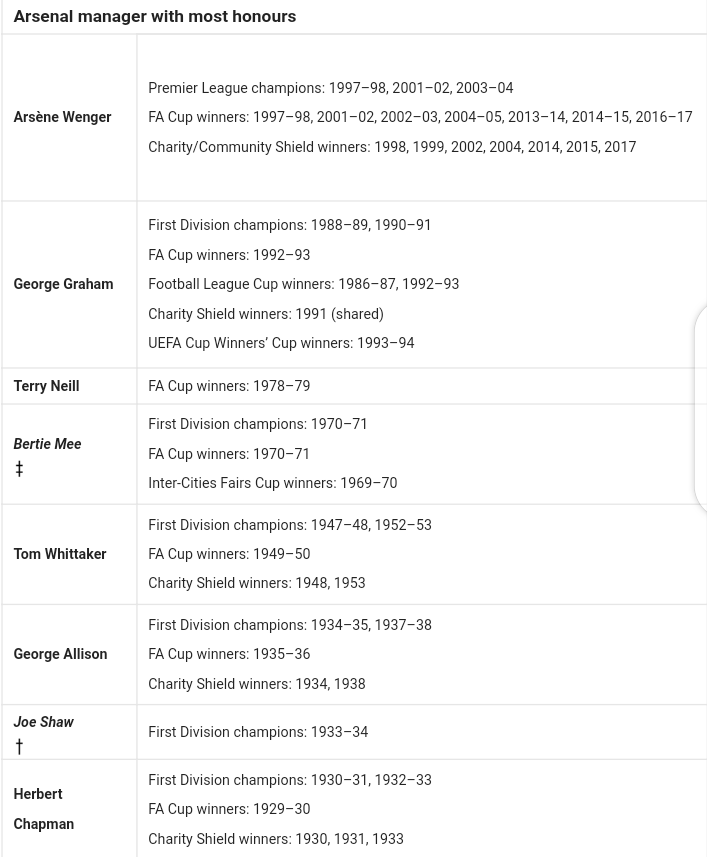 Pat Rice is the Arsenal manager with the best win percentage in history. Although he was only manager during a short period and was manager during four games.

If we only look at manager with +50 games then Arsene Wenger is the manager with best win percentage in history. His has been manager during 1 235 games with a win percenage of 57,25%. 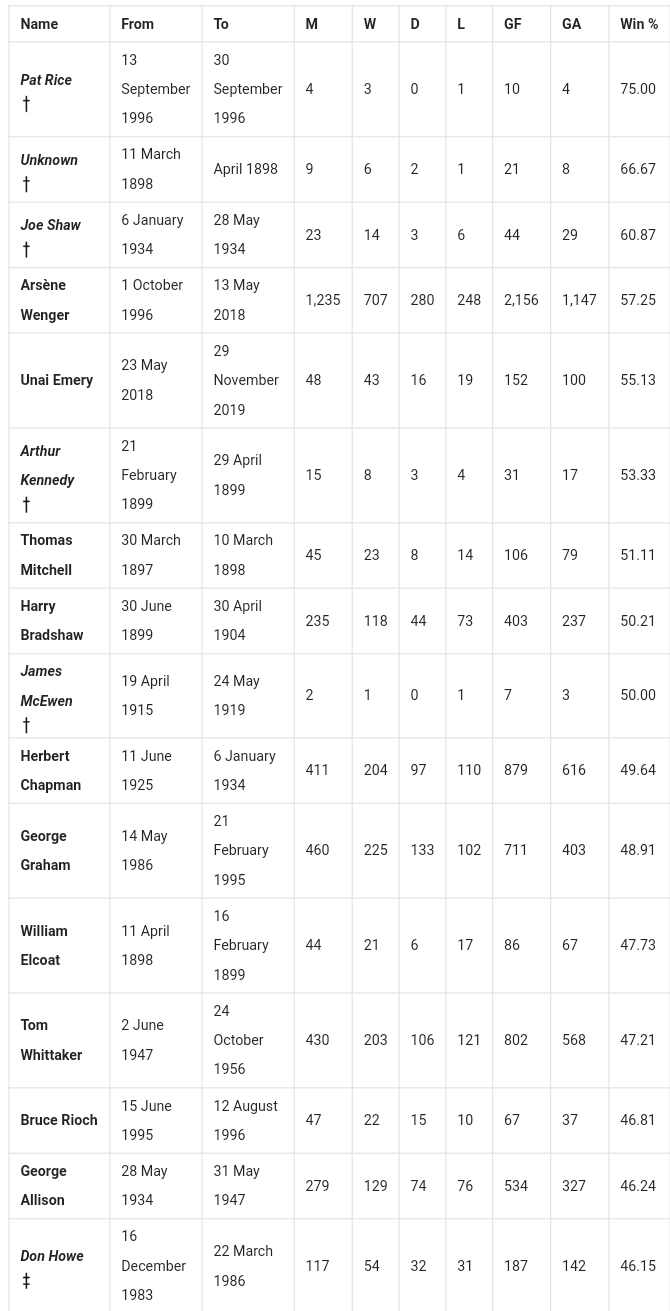 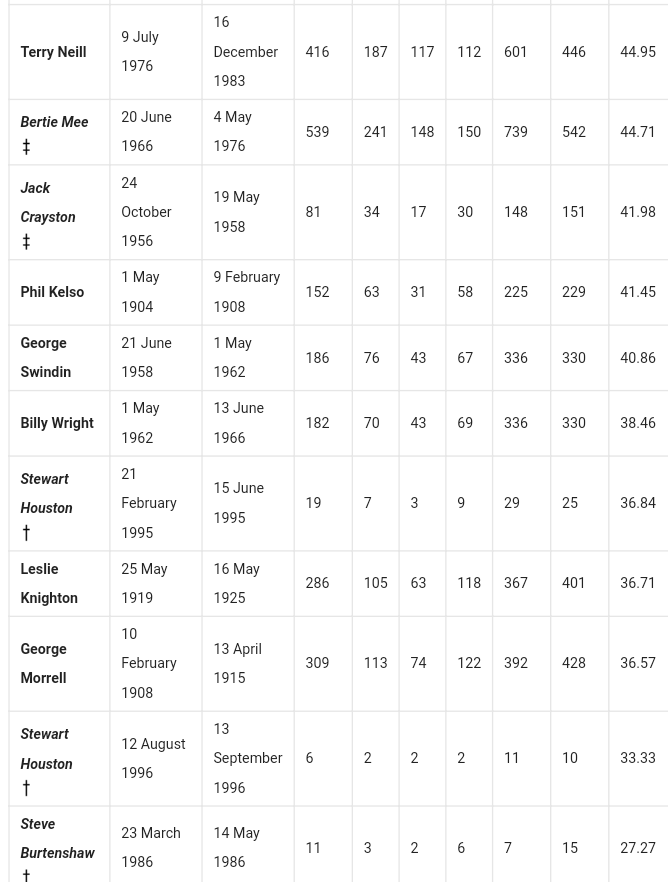 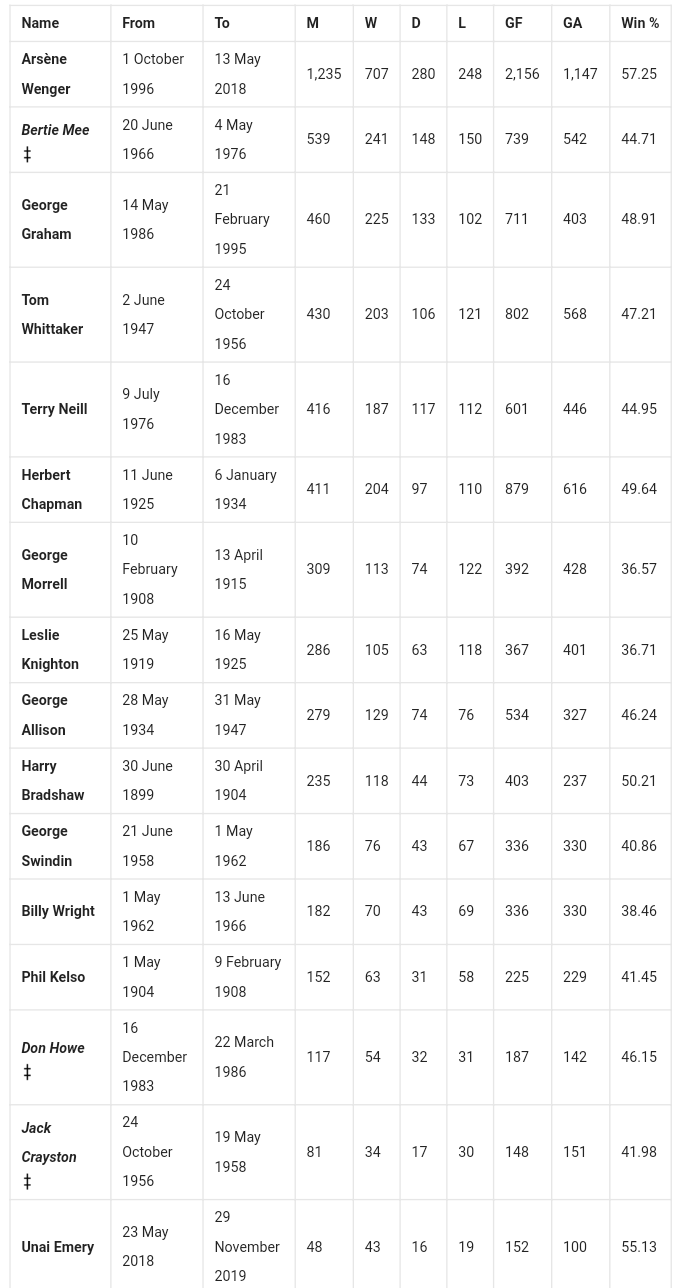 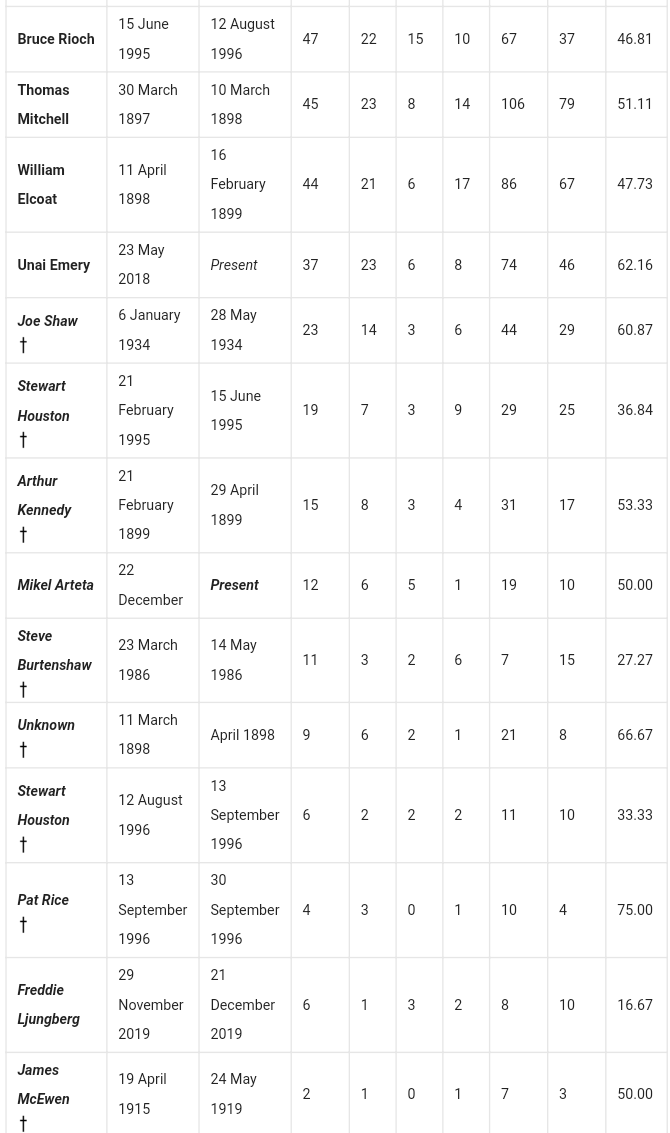 On 20 December 2019, Arteta was appointed head coach at former club Arsenal, signing a deal until 2023.

Upon his appointment he stated that he believed the club had lost direction and that he didn’t want players to shirk responsibility: “I want people to take responsibility for their jobs and I want people who deliver passion and energy in the football club. Anyone who doesn’t buy into this, or that has a negative effect or whatever, is not good enough for this environment or this culture.”

On 26 December 2019, Arteta walked out of the dugout for the first time as an Arsenal manager for their Premier League match against A.F.C. Bournemouth which ended in a 1–1 draw, thanks to a second half equaliser from Pierre-Emerick Aubameyang.

Although a 1–1 draw was not the start the Spaniard would have dreamed of, he later said that he was pleased with attitude, passion and the fighting spirit of his players. On 2 January 2020, Arteta won his first match as an Arsenal manager after a 2–0 win over Manchester United at the Emirates.