By IBNEWS (self media writer) | 1 year ago 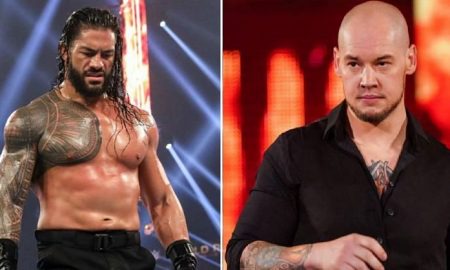 Roman Reigns is a terrific heel on WWE TV and isn’t taking any prisoners in real life either. The Tribal Chief recently posted a video on his official Instagram handle in which he can be seen performing a grueling chest workout in the gym.

The post piqued the attention of Roman Reigns’ arch-rival King Corbin, who asked Reigns if it was his half rep day. The Universal Champion hit back soon after with an amusing response which you can check out HERE.

More than a year ago, King Corbin kicked off a feud with Roman Reigns on WWE SmackDown. This was back when Reigns was still a good guy. The duo faced off on various occasions and it all came to an end at Super ShowDown 2020, where Reigns came out victorious in a Steel Cage match.

Since then, Roman Reigns has turned heel and his new personality is being loved by the WWE Universe. King Corbin shared his thoughts on Reigns’ new persona in September last year and said the following:

“I think it’s refreshing. I think [Reigns] needed to evolve for himself. I think he wanted to evolve and I think he sees that he can bring a new attitude and a new game to SmackDown…the more incredible stars we have, the better we are as a whole. And I think he’s found something in Paul Heyman that will benefit him and we all know what Paul Heyman did with Brock Lesnar. I think he can do the same with Roman Reigns. So it’s something special right now. He’s firing on all cylinders. He took a few months off and we’ll see where he’s at physically when he gets tested in a long championship match. He took a shortcut, I can’t hate him for that, taking that shortcut to get that universal championship at Payback.”

Roman Reigns went on a hiatus soon after his feud with King Corbin was over, which prompted WWE to replace him with Braun Strowman for the Universal Title match at WrestleMania 36. King Corbin is still performing on the SmackDown brand but is not the most hated heel on the brand anymore.

Roman Reigns came back at SummerSlam 2020 as a bad guy and is doing an incredible job as a heel.

Content created and supplied by: IBNEWS (via Opera News )