By yemiyatch (self media writer) | 2 years ago 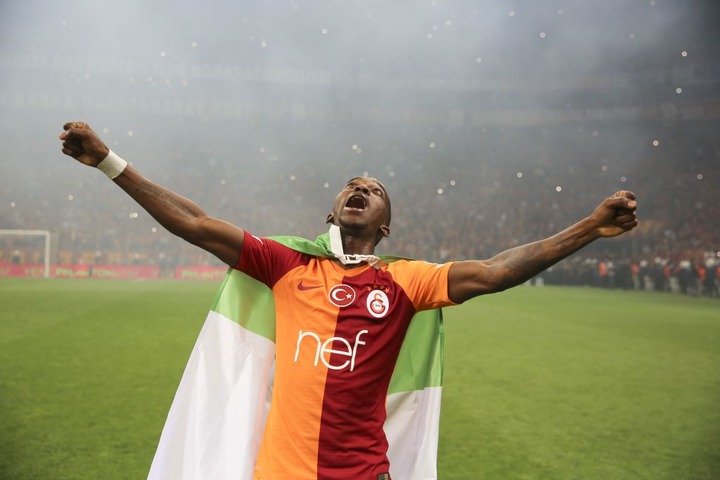 With leagues across Europe resuming after the coronavirus-enforced break, a number of Nigerian stars will continue the race for the league title with their respective clubs. In this piece, Complete Sports' Sulaiman Alao profiles the Nigerians who might still emerge league winners alongside Belgium-based duo of David Okerere and Emmanuel Dennis who are already crowned as Pro League Champions with Club Brugge...

Anthony Nwakaeme leads the Nigerian international trio of Azubuike Okechukwu and Henry Onyekuru who are currently in the race to clinch the Turkish Super Lig title.

31-year-old Nwakaeme who stars for league leaders Trabzonspor, remains one of the most consistent Super Eagles strikers in Europe this season having bagged 11 goals and 9 assists in 25 Super Lig appearances so far.

Trabzonspor, which previously had two other Nigerian stars Ogenyi Onazi and John Obi Mikel in their ranks, are neck-deep in the title race with 56 points from 27 games so far.

They are however, being hotly chased by Okechukwu's Istanbul Basaksehir who are in second position only by virtue of having lesser goals difference. 23-year old Okechukwu who plays as a midfielder has featured in 17 games since arriving from Egyptian side Pyramids FC at the start of the season.

Also in the mix is Onyekuru's Galatasaray who are just six points behind the first two in the third position. Onyekuru had retraced his steps back to Galatasaray following a bad spell at French Ligue 1 side, Monaco at the start of the season.

The 23-year old striker now has one goal and two assists in eight league games for Galatasaray who are battling to reclaim the title they had won in the previous two seasons.

With just seven rounds of games to go before the end of the season, the title race in Turkey is set to go down the wire. And whichever way the pendulum swings, one of the Nigerian trio will emerge as Turkish Super Lig champion.

Nwakaeme had previously won the Israeli title thrice while Onyekuru had won the Turkish title once leaving Okechukwu the odd man of the trio yet to win any league title.

The 23-year old striker who had featured for a number of Italian clubs early in his career has become a mainstay player with Partizan and is having the best season of his career so far being the club's joint top scorer alongside Bojan Matic in only his first season.

Umar has scored 12 goals and bagged 13 assists in 24 league games so far helping Partizan to the 2nd spot on the 16-team table with 64 points in 29 matches behind leaders Crvena Zvezda with 75 points.

And with just a game to go in the regular season, Partizan are still well in the title race as the league winner will be decided in the Championship Round where Partizan will be banking on Umar's goals to wrest the league title from Zvezda.

Idowu had previously won the Russian Cup and the Russian Super Cup with Lokomotiv who are currently in the title race being second on the league table with 41 points behind Zenit Petersburg with 50 points after 22 matches.

With 8 rounds of matches to go and with the league set to restart at the weekend, Idowu who has struggled for first team action will be looking to get more game time having featured in 8 games so far this season for Lokomotiv.

The 28-year old helped Lokomotiv to a second spot finish last term and will be looking to dethrone defending champions Zenit this season.

Having tasted league title success with Chelsea back in England, Victor Moses will definitely not reject the chance to land the Italian title with Inter Milan if they were 'gifted'.

Inter who are currently sitting 3rd on the Serie A table with 54 points after 25 matches stand a remote chance of 'stealing' the Scuddeto ahead of the leading pack of Juventus and Lazio with 63 and 62 points respectively.

But with a game in hand and with 12 rounds of matches to go, Inter are still mathematically in the title race especially if the duo of Juventus and Lazio decide to go self-destruct at the restart of the Serie A this weekend.

Moses joined Inter on loan in January with the former Nigerian international having featured in just 3 games bagging 1 assist before the outbreak of the coronavirus pandemic.

Content created and supplied by: yemiyatch (via Opera News )