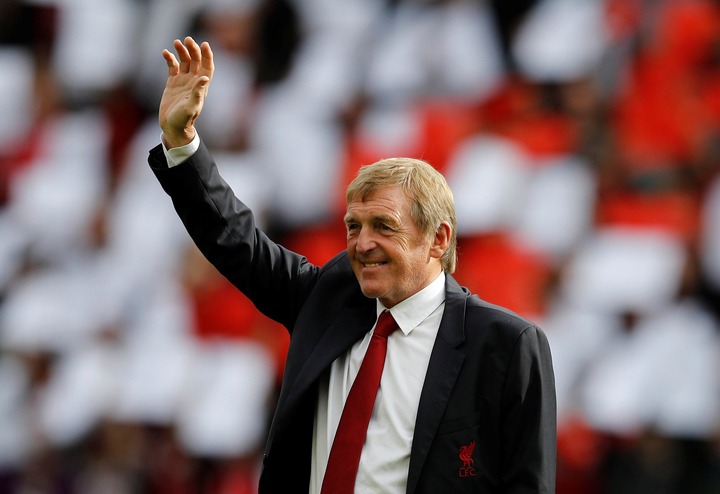 Here we look at the longest-serving Liverpool managers of all-time. We will look throughout the history of Liverpool FC past managers to find out who was the best.

When you think of long-serving Liverpool FC football managers, Kenny Dalglish probably comes to mind (depending on your age). But you’ll be surprised to find out that Jurgen Klopp doesn’t even reach the Top 5 longest-serving Liverpool managers.

Being a manager is tough these days. The managerial turn-over is very high. It's not uncommon to see a manager get sacked after just a few bad results.

But back in the old days, Liverpool managers tended to last a lot longer. Perhaps it was a different time back then, or perhaps it’s because the current expectations from fans around the world are very demanding. Expectations are higher for Liverpool managers these days and the stakes are high. Managers such as Hodgson and Dalglish the second time have been sacked for one bad season. Those two are probably two of the top five managers in the world.

So we could safely say that managers back in the old days before the Premier League era lasted a lot longer. But, you can’t fault the change in managers. Clearly, it works. Liverpool has been through a large barren phase. Since their dominance in the mid-1970s and early 80s, they had completely phased out from being a top team. Despite their Champions League glory in 2005, it was a one-off, and naturally, the players could not repeat their greatness. Hence, now the new team under new boss Klopp who also has won the Champions League are hopeful of winning many more trophies.

So here we will list all Liverpool FC previous managers. In our Liverpool FC managers list, we will sort the managers from the longest time at the club down to the shortest.

So finally, here are the longest-serving Liverpool managers of all-time. 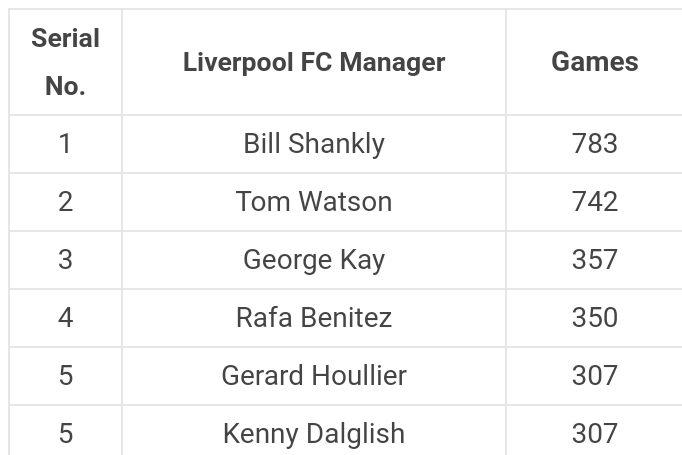 Apart from Tom Watson and George Kay, we will have a look at the other managers and about their careers in Liverpool!

He is one of the longest-serving Liverpool managers!

Widely known as the paving stone on which Liverpool’s successes were laid, many will be surprised to see Bill Shankly in 7th position here. However, that’s how it is.

From 1959 to 1974, Shankly managed 783 matches for Liverpool, a record which is yet to be bettered. Under Shankly, Liverpool won 407 matches while losing 178. The other 198 matches ended in a draw. Under Shankly’s tutelage, Liverpool won 9 trophies. This included three top-flight league titles and Liverpool’s first European trophy, the 1972-73 UEFA Cup.

Shankly left Liverpool in 1974 and this was the last club he managed. Bill Shankly passed away in 1981, aged 69. 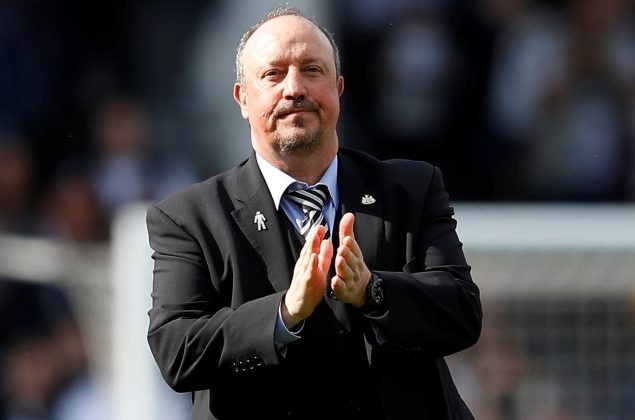 Rafael Benitez joined Liverpool from Valencia in 2004 following the resignation of Gerard Houllier. Benitez managed 350 matches during his spell at Liverpool. Out of these matches, Liverpool won 194 matches while losing 79. The other 77 matches ended in a draw.

Under Benitez, Liverpool won four trophies, the biggest one of them being the Champions League in 2005. After a poor 2009-10 season where Liverpool ended the Premier League in 7th position, Benitez quit Liverpool.

Gerard Houllier became Liverpool manager in 1998 when Roy Evans was also the manager. Liverpool decided to use the concept of two managers at the club for the first time in more than a century. However, the joint-management thing did not work out as Evans resigned in 1998, leaving Houllier solely in-charge of Liverpool.

Houllier managed Liverpool till 2004, managing 325 matches for the club. Under Houllier, Liverpool 167 matches while losing and drawing 79 matches each. Liverpool enjoyed it’s the finest period in the 21st century under Houllier, winning 6 trophies. This included the treble of League Cup, FA Cup, and the UEFA Cup in the 2000-01 season. Houllier also guided Liverpool to the UEFA Super Cup in 2001.

Sadly, Liverpool could not win the Premier League under Houllier. The closest they came to winning the league was in the 2001-02 season when they ended 2nd in the league, 7 points behind Arsenal.

Gerard Houllier left Liverpool in 2004. Houllier’s spell at Liverpool was enough to receive the Order of the British Empire.

Sir Kenny Dalglish had two managerial spells at Liverpool. He succeeded Joe Fagan in 1985 while he was still playing at the club. Dalglish managed Liverpool till 1991. During this time, Dalglish managed 307 matches. Liverpool won 187 matches while losing 42. The other 78 matches ended in a draw.

Dalglish’s second spell came in 2011 when he joined Liverpool following the sacking of Roy Hodgson. This spell, however, was a disappointing one as Liverpool won only 13 out of the 31 matches Dalglish managed. Dalglish however, managed to guide Liverpool to the 2011-12 League Cup which is to date, the last silverware won by Liverpool. Liverpool eventually sacked Dalglish after the end of the 2011-12 season.