AFCON: The matches Chelsea's Edouard Mendy could miss as a result of the tournament

Most talks about the impact of the African Cup Nations have focused on Liverpool, and rightly so. However, Chelsea will have to deal with the same issue as Senegalese goalkeeper Edouard Mendy and Moroccan winger Hakim Ziyech would join up with their respective national teams just before the tournament which will last till 06 February kicks off on 9 January 2022. Having said that, our focus is on Mendy whose backup Kepa Arrizabalaga is not trusted by the Chelsea fans. 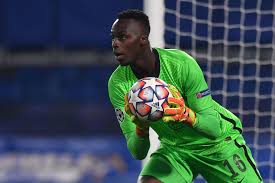 That Chelsea is currently first in the league is mainly due to the form of the Senegalese goalkeeper. So far he has 3 clean sheets to his name in the league but that doesn't tell the whole story as he also played a crucial role in some matches that the Blues have conceded a goal.

For instance, his performance against Liverpool in which Reece James was sent off helped Chelsea leave Anfield with 1 point as he made 8 saves in that game. It was also the same against Manchester City as his performance ensured Chelsea continued to have a respectable goal difference. So far, he has made a total of 24 saves in 6 league appearances. I think that shows how important he is to Chelsea.

According to GIVEMESPORT, the third and fourth rounds of this season's FA Cup will take place on 8 January and 5 February 2022 respectively. That means Mendy could miss both games if Senegal goes all the way to the final.

In the Premier League, the Senegalese could miss the match against Liverpool on 1st January. However, that one is not a certainty yet as it depends on when he travels for the tournament. Having said that, it is very likely he will miss the 2 league games against Manchester City and Tottenham on 15th and 22nd January respectively. It may not end there as he could also miss the league game against Brighton on 08 February if his country gets to the final. In all Mendy could miss 2 FA Cup games and 4 Premier League games.

Do you think Chelsea can cope without Edouard Mendy?