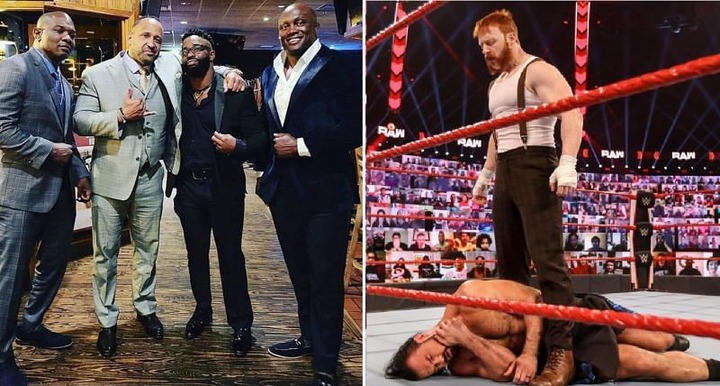 The Hurt Business member Shelton Benjamin had a message for Drew McIntyre on Instagram after Sheamus turned on the WWE Champion on this week's RAW.

On RAW, Drew McIntyre and Sheamus were involved in a segment with WWE Hall of Famer Edge, who hasn't decided who will be his WrestleMania 37 opponent. After Edge left the ring, Sheamus took the WWE Universe by surprise by hitting a Brogue Kick on McIntyre. Sheamus later said that he's tired of being simply known as Drew McIntyre's friend and is eyeing the WWE Championship. McIntyre accepted the challenge, with WWE uploading the clip of McIntyre's promo on its official Instagram handle.

The clip garnered a response from Shelton Benjamin of The Hurt Business, who let McIntyre know that he hasn't got any friends, following Sheamus' heel turn. Check out the post and Shelton's message to Drew McIntyre below:

Drew McIntyre never expected Sheamus to turn on him

Drew McIntyre and Sheamus became friends way before the duo made their way to WWE. Both Superstars saw several ups and downs in their WWE careers but managed to taste World title gold on the main roster. Sheamus finally showed his true colors and turned on Drew McIntyre on RAW, making it clear that the WWE Championship is way more important to him than his 20-year friendship with McIntyre.

There's no word yet as to when these two former friends will face off with the WWE title on the line. Edge has yet to decide who he will face at WrestleMania, and it could very well be the winner of Drew McIntyre vs. Sheamus.