Most Goals Scored In The 21st Century.

Ranging from the number of games football players have played in the 21st century, a statistics has been made based on the achievements of all the players, and thus, the ones with the most goals have been selected.

Of course, we all know that football players vary with abilities, and with that, there is a way each of them records goals.

Some amazing football players have been seen today as one of the best when it comes to goalscoring.

Thus, with the respective goals scored by football players in the 21st century, below are the records of the most goals scored.

Being one of the great players today, Cristiano Ronaldo has created lots of records, and on this list, he is leading with the highest number of goals.

Out of all the games he played, he has recorded a total number of 730 goals, and this has made him the player with the highest number of goals.

Following after Cristiano Ronaldo, Leo Messi is also one of the greatest players of the century, and he has shown a lots of amazing records just like Ronaldo.

Thus, based on all the games he has played, he has scored a total number of 700 goals, which makes him the second best.

Despite being an old football player, Ibrahimovic has shown lots of strength when it comes to goalscoring.

Thus, on the list, he is seen as the third as he records 523 goals.

Lewandowski, also an old football player, has broken lots of records and has created records in the football history.

He has scored a total number of 466 goals from all the games he has played so far.

Being a companion of Lionel Messi, Suarez has been able to achieve much since he is also an excellent player.

Thus, he has recorded a total number of 461 goals in his football career.

Being a great player too, Eto'o has recorded a total number of 408 goals in his football career.

Muntellar has been able to record 399 goals in his football career, and thus, he is the 7th player on the list of the most goals scored in the 21st century.

Cavani is one of the greatest football players Paris Saint German (PSG) ever had.

With this, and due to his excellent performances, he has scored a total number of 389 goals in his football career.

Being the 10th on the list, David Villa has scored a total number of 386 goals in his football career.

Thus, these are the top 10 most goals scored in the 21st century. 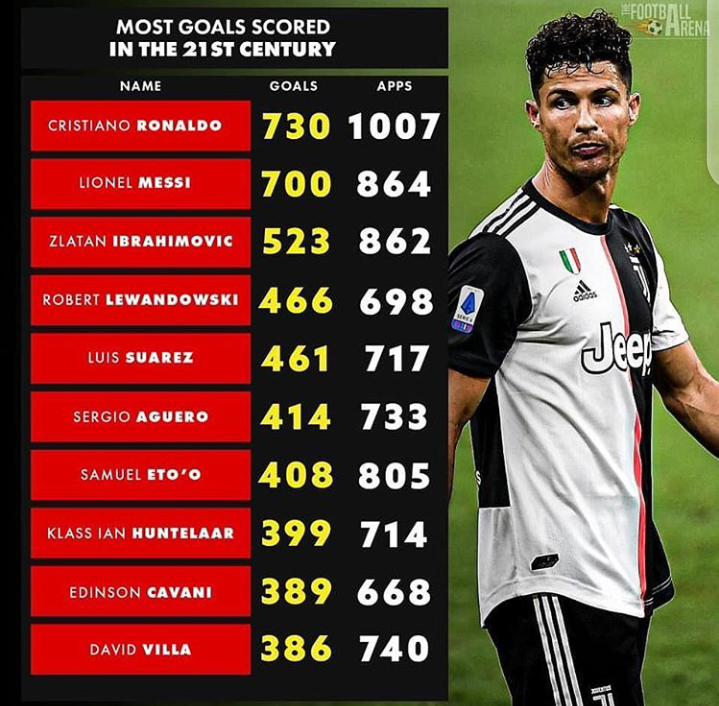