James Storm Reveals How It Was Like Working On WWE NXT

It was recently reported that former IMPACT Wrestling star James Storm was offered a full-time contract by WWE to join the company post-WrestleMania 36. However, the plan never came to fruition as WWE was forced to retract the contract offer, due to the COVID-19 pandemic.

Storm understood the gravity of the situation but didn't rule out a WWE-run in the future. Had Storm signed with WWE, it wouldn't be his first venture with the company. The Cowboy previously performed on NXT in 2015. 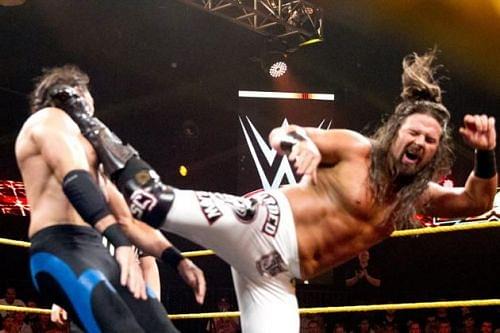 Back in 2015, James Storm arrived in NXT from IMPACT Wrestling when it was still treated as a developmental brand and received a great response from the NXT Universe. However, Storm wasn't a full-time contracted employee of WWE and instead returned to IMPACT when they offered him a better contract.

Speaking to Lucha Libre Online, Storm revealed how it was like working for NXT at that time and how it differed from IMPACT:

James Storm says he was treated with respect on NXT

James Storm said that he has fond memories associated with WWE's black and gold brand, and that everyone there treated him with respect:

"It was really cool to go down there because everyone treated with me with respect. From the very top to the guys who haven't even made the  NXT roster yet, they have a really good system there and the guys there are really respectful of the guys who came before them. It was a lot of fun, and also, to see how they do things there - it was unreal to see the kind of things they do at the Performance Center."  H/T: Wrestling Inc.

What is James Storm's current status?

James Storm is currently the reigning NWA World Tag Team Champion along with Eli Drake. However, it was recently reported that he is no longer contracted with NWA