The Most Controversial Footballers of All Time.

By Sunny_Vale (self media writer) | 2 years ago

Football is no doubt the most popular sport in the world. It is enjoyed by people of all as grades, across the world.

And just like other sports, the game of football has witnessed alot of controversies, disasters and even players' misconduct both on and off the pitch.

In this article, I will examine the top 5 controversial football players of all time. 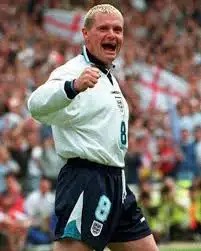 Paul Gascoigne played skilful football across Europe in his club football career, and also across the world for his country.

But aside his remarkable skills, he is also remembered for violent behaviour. In following his retirement, he struggled with alcohol and drug addiction amid of emotional problems. As a result, Paul faced numerous arrests and charges for drunk driving and drug possession.

Also, the former player has been in rehab a number of times though this only turns out to be a temporary solution. Not just that, the aforementioned problems led to a premature of his coaching career, after losing his job at Kettering Town, somewhere in 2005.

Second on the list is French player, Eric Cantona. He was a profilic player at the English Premier Club, Manchester United. However, certain incidents put his name on the list of what analysts called Bad Boys of the sport.

At Auxerre, early in his career, he punched a teammate on the face. When substituted, he normally reacted negatively, which meant suspensions and fines by the club.

Let us look at another major incident involving him at a match against Crystal Palace in 1995. Eric was sent off for deliberately kicking Richard Shaw. After that, he attacked a Crystal Palace fan. He was found guilty and sentenced to two weeks in prison, which was reduced to 120 hours of community service. Besides, he got a ban of eight months and a two-week wages fine by the club.

If there is any player that should be called a Bad Boy, it should be Mario. With criticisms from coaches and officials, including Jose Mourinho, this Itaian has got into trouble due to his behaviour and temprament.

For example, when Mourinho was his coach at Inter Milan coach, they were at loggerheads. . At his time at Inter, he wore an A.C Milan jersey, on live television. Milan is Inter's arc rival, as far as Italian football is concerned.

From Inter Milan, Balotelli moved to Manchester City. There, he threw a dart at a player during his first season at the club. And not just that, he later had a serious altercation with head coach, Roberto Mancini,after a bad tackle on a team mate during training.

And even outside the pitch, he had also committed several times. For example, in October 2010, he and his brother were interrogated by prison officers after they drove into a women’s prison without permission.

Diego Maradona is unarguably one of the greatest football players of all time. He plied his successful trade across Europe and South America. Maradona would not be forgotten in Napoli, where he helped the club to success.

But on the other hand, Maradona faced so much controversies, such as provoking an opponents and starting ugly fights, now infamous "Hand of God" at the 1986 World Cup.

Recall that that goal scored against England helped Argentina to win 2-1. However, the goal remain controversial till date.

And again at the 1994 World Cup, Diego Maradona representing Atgentina, was sent home after he failed a drug test for Ephedrine. After investigation, the player was handed a 15 month ban.

Similarly, he faced so much issues with cocaine addiction when he was at Barcelona and Napoli. And as result, his health challenges after retirement from playing career, simply justified this.

On the final spot of the list, we find the prolific Uruguayan playmaker, Luiz Suarez. He has made so much impact in his national team, just d way he has done in all the clubs he has played for. Recall that he one formed a member of the popular MSN at Barcelona, which attained great heights for the club.

But just as it with history, the negative aspects cannot be ignored. Luiz Suarez has not been excepted from controversies as far as football is concerned.

To start with, we look at his racial abuse on Manchester United, Patrice Evra in 2011. After investigation, Suarez was handed an eight-match ban and £40,000 fine. Secondly, he was in 2009, he was involved in a fight with Albert Luque, his Ajax teammate.

Thirdly, at the 2010 World Cup, he deliberately handled the ball, to prevent Ghana from scoring in their quarterfinal match. Ghana eventually lost the match, as Asamoah Gyan missed the resulting penalty.

How can football fans forget about Suarez in a hurry, especially when he has been accused and charged for biting on several occasions?

These biting incidences are summarized thus: Suarez bit PSV defender, Otman Bakkal in, 2010, which earned him a seven-game ban; he About three years later, bit a Chelsea defender, Blanislav Ivanovic, in 2013, earning him a ten-match suspension; and again, he bit Giorgio Chiellini, an Italian player, at the 2014 World Cup.