Manchester United and Chelsea will today clash to secure their place in the FA Cup final. A meeting with Arsenal next month awaits one of the two sides after the Gunners landed a 2-0 win over Manchester City on Saturday evening. However, were the tie to be decided by the combined XI using the two teams' Premier League rating this season, then it's United who would edge into the final.

The top rated player of the two sets of players is January arrival Bruno Fernandes (7.95) who has been a revelation since joining from Sporting CP. And fans were excited at the prospect of Fernandes linking up with Paul Pogba (7.27), a combination that hasn't disappointed. Operating ahead of the pair in midfield is Willian (7.35). The Brazilian's contract is up this summer, but he's proving there is life in the old dog yet as he continues to excel in the final third.

Of United's awesome attacking foursome, it's Mason Greenwood who misses out at the expense of Christian Pulisic (7.18) on the right flank. On the opposite wing, Marcus Rashford (7.41) has continued to excel from wide in Ole Gunnar Solskjaer's XI, linking up well with Anthony Martial (7.34). The Frenchman spearheads the attack in this combined side and for good reason having now scored 17 goals and provided five assists for the Premier League giants.

In goal, David De Gea (6.55) is the best of the bunch between the sticks, keeping compatriot Kepa (6.40) out of this team, though the likelihood is that Sergio Romero and Willy Caballero will start for United and Chelsea, respectively. It's a 50/50 split in defence with Aaron Wan-Bissaka (7.20) operating at right-back. 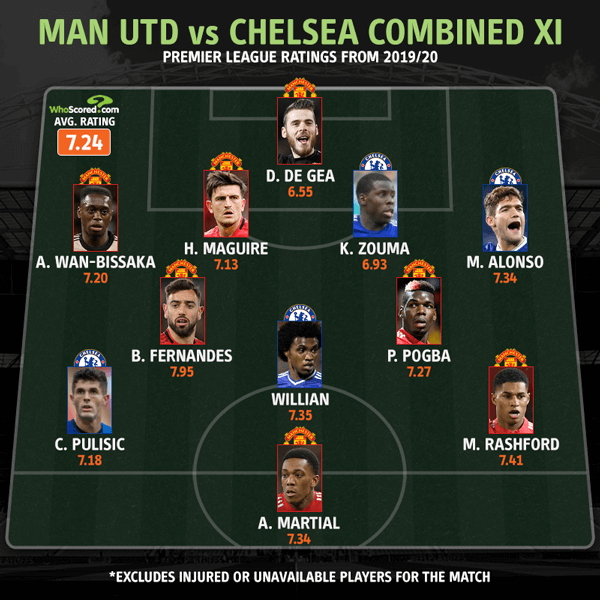 Fellow summer arrival, and Manchester United captain, Harry Maguire (7.13) is the final United representative in this combined XI and the England international is partnered at the heart of the defence by Blues centre-back Kurt Zouma (6.93).

The final player in this side is Marcos Alonso (7.34). Chelsea head coach Frank Lampard wants a new left-back this summer, but Alonso is ensuring potential suitors remain interested in his services ahead of the transfer window opening next week. Perhaps the notable exception from this team is Cesar Azpilicueta (7.16). Chelsea's Mr. Dependable just misses out to Wan-Bissaka at right-back and Alonso at left-back.