By Feroking (self media writer) | 1 year ago 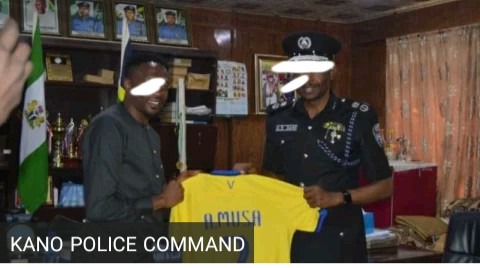 Ahmad Musa is a popular Nigeria International footballer, he has won several matches and scored several goals and also he is Nigeria's Super Eagles Captain.

A man who worked at Ahmed Musa Sports Center, has been arrested by Kano Police for disguising himself as Ahmed Musa.

On Tuesday, Kano Police Command announce that they have arrested one Gambo Yakubu for disguising himself as Nigeria's Super Eagles Captain, Ahmad Musa to trick people.

According to the Command DSP, Abdullahi Haruna, the 30-year-old man that was arrested has collected about N700,000 from different people with the promise he made to them by giving them a football club in aboard.

"He used to work with Ahmad Musa Sports Center before he was sacked and then he forged many documents that he used to trick people", Officer Abdullahi says.

The manager of Ahmad Musa Sports Center took the complains to the police after many people started to meet them to enquire about their money that they have payed.

According to the police, is about 15 people that feel victim to Gambo's plan, after he made them to pay a large sum of money to buy a form.

Content created and supplied by: Feroking (via Opera News )