By wizpatdayoung (self media writer) | 1 year ago 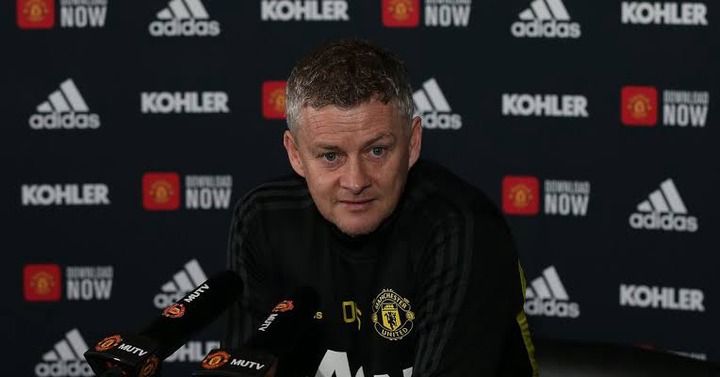 The boss made two changes to the starting XI on Thursday night as his Reds recorded an important 2-0 win over Crystal Palace, maintaining the hunt for a top-four finish in the Premier League.

There were unusually 102 minutes of match action following a serious injury to Patrick van Aanholt, which required lengthy medical attention, but Ole said he is not concerned about tiredness.

“We’ll be alright,” the boss told us, while discussing the trip home to Manchester. “It is what it is and these boys they can recover. An occasion like the semi-final at Wembley will give anyone energy.”

Expanding on the squad's fitness in the post-match press conference, Ole said: “Yeah, we’re fine, we’re fit, the players are raring to go and wanting to play again.

“We’ve got players on the bench who are desperate to join in, but it was forced today as Luke and Brandon weren’t available, but Tim did great and Scotty has been fantastic so he took a shift for Nemanja, so we’ve got enough players.

“We’ve had a chance over this period to take players off. We’ve been three goals up in many games after 60 minutes so we’ve been fortunate in that respect.”

Solskjaer is expected to provide an update on his squad when holding the pre-match press conference with journalists on Saturday morning.

The media briefing will be streamed via MUTV, ManUtd.com and our Official App from 10:30 BST, so make sure you tune in for the latest news.

WHO WILL START AT LEFT-BACK?

One of Ole’s two alterations on Thursday was enforced by injuries to Luke Shaw and Brandon Williams, leading to fit-again Tim Fosu-Mensah making his first United appearance since May 2017 - coincidentally, against Palace at Old Trafford.

“Well I’ve seen him in training and I’ve seen him before obviously,” praised Solskjaer on Thursday. “And with his pace and his physicality and his attributes, we thought he deserved to play this game. He proved it and he showed it. Of course, he’s going to feel it tomorrow but I’m delighted for him.”

It is currently unclear if the aforementioned full-backs will be available for this weekend’s FA Cup tie, which may open the door for Fosu-Mensah to retain his starting berth. The young Dutchman has experienced this occasion in the past, of course, after starting our 2016 semi-final against Everton."

“I can't fault him - I thought he was solid and he had threats against him,” enthused club legend Sammy McIlroy on MUTV. “I don't think he did anything wrong in a position that he is not used to. He hasn't played for United since 2017, after going out on loan, and the kid did excellently.”

ELSEWHERE IN THE SQUAD

Scott McTominay also returned to the team on Thursday night in place of Nemanja Matic as Solskjaer named a strong team, despite the tight turnaround for our trip to Wembley Stadium.

The boss only made two of his five permitted substitutions as well, opting to replace Mason Greenwood with Jesse Lingard after 62 minutes, before taking McTominay off for Matic.

It will be interesting to see how many changes Ole makes to the XI this weekend – if any at all - given that so many of his key players completed full matches.

Goalkeeper is one area of interest, given Sergio Romero has played instead of David De Gea in the previous rounds and kept four clean sheets along the way.

Long-term absentees Phil Jones and Axel Tuanzebe will miss out due to injury.

In a surprising piece of scheduling, Frank Lampard’s Blues were last in action on Tuesday night – beating Norwich City in the Premier League - and have therefore had two added days of preparation.

France international N’Golo Kante is out of the tie after failing to recover from a hamstring injury he picked up earlier this month.

Promising youth product Billy Gilmour is expected to miss out on the match with a knee injury, however, while Marco van Ginkel remains a long-term absentee with his own knee problem. Lampard also suggested his side may have other injury issues which would be monitored prior to Sunday's game.

“The squad is okay but N'Golo Kante won't be fit for the match. There are a few other niggles that will be checked on in the next 24 hours,” the former Blues midfield told reporters on Friday.

The Blues’ latest signing from Ajax, Hakim Ziyech, trained with his new team-mates for the first time this week, although the Morocco international is not eligible to play just yet.

Content created and supplied by: wizpatdayoung (via Opera News )