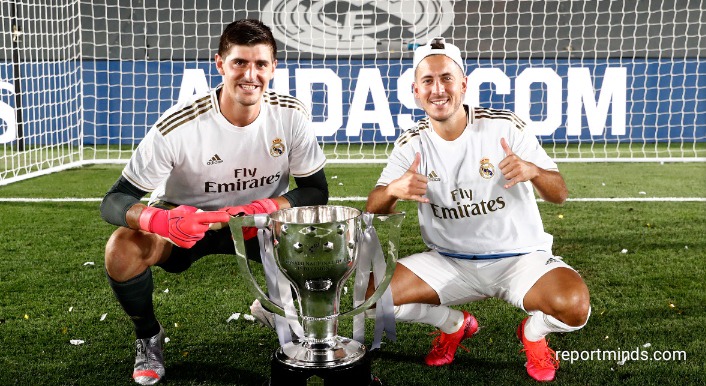 Eden Hazard was pictured with his country mate, Thibaut Courtois as they posed with the La Liga trophy.

Real Madrid are crowned Champions of the league following their 2-1 win against Villarreal at the Alfredo Di Stefano stadium on Thursday night .

Zinedine Zidane side won the title with two games left to play.

Although, Hazard has endured difficult start to life in the Spanish capital due to series of injuries.

Recall that he joined Los Blancos from Chelsea for 100m euros in the summer of 2019.

Fans of the Los Blancos were expecting alot from the Belgian but has only managed to feature 16 times and scored a goal in the league so far.

While he's team mate, Courtois has been in great form in the second half of the campaign, with the highest clean sheets in the league.

Although, he also had a difficult start in his first season in 2018 with Real Madrid when he joined from Chelsea. He has now adapted to atmosphere in Spain.