By Emmybillion1 (self meida writer) | 18 days

Ronald Koeman held a press conference before Barcelona's game against Granada on Thursday, the game is so vital that if they manage to pick up a win Barcelona will go top of the league for the first time this season. The Dutch coach had a lot to say before the game tomorrow.

Koeman: "We know that we can be leaders, it can be a reward, but first we have to win. If you look back it is an unexpected situation, fighting for the league is something great that we have achieved.

Koeman: "All the games are important. We have already been under a lot of pressure, where we cannot fail. We need the points, all of them, also tomorrow's. We know that it's a fight between four teams to win the league."

Koeman: "The return of the fans is important and beautiful. Having the public in your favour is important, the games are better. In Holland, I saw games with a few thousand people and it's more exciting. We miss our fans. Hopefully soon."

Koeman: "A lot of people say we're the favourites now, but we don't think so. There are no easy games, the team has learned that you have to go from game to game. We don't have to go crazy with the possibility of being able to win La Liga."

Koeman: "Griezmann is a team player and trains a lot. He's probably had bad luck this season, and now he has more confidence. You can't score the first goal against Villarreal if you lack confidence."

Koeman: "We have a way of training and preparing for the games and it will not be different tomorrow. The players know that at Barça you have to win things, we have leaders and experienced players and they must transmit it to the young players."

Koeman: "Rotations? It is difficult for those who are not playing, but now the important thing is the team. We will make decisions based on the freshness and the physical data that we have on each player."

Koeman: "I'm not worried about the accumulation of cards, it's part of football to have players suspended. The important game is tomorrow. You have to be ready and not take risks in some plays."

Koeman: "Mentally we are strong, we have had difficult times. We have managed to turn the score around in important matches and the trajectory in the Copa del Rey speaks for itself. We are 6 games away, whoever dominates physical fatigue will win La Liga."

Koeman: "PSG's offer to Messi? I am not interested, first because I do not know if it is true. I hope Leo stays with us, he must end up here because he has been here all his life, but it is his decision. What worries me is the game tomorrow."

Koeman: "Of course we are working for next season, thinking about improving, like any coach and any club. We have been without Ansu Fati for five months and we have known how to deal without him, an important player despite his age."

Koeman: "Possible signings? Together with Ramon Planes and Mateu Alemany, we decide what is best for the team, but in the end, the financial question depends on the President."

Koeman: "The team who's first in the table is the favourite and we're still not there." 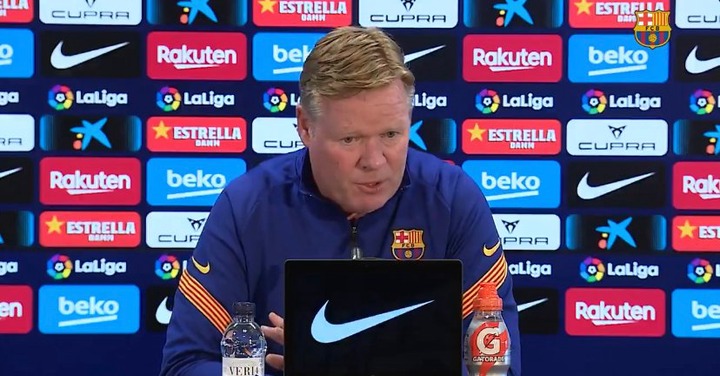 Content created and supplied by: Emmybillion1 (via Opera News )

Opinion: How Netherlands Could Lineup In Euro 2020

Barcelona News: 3 EPL clubs have the chance to sign Messi, latest on Xavi and Koeman