Has Arsenal Recovered From Their Woes?

By Sochikaima (self media writer) | 1 month ago

Arsenal destroyed West Bromwich Albion to reach the Carabao Cup third round. The gunners hammered West Brom 6:0 to record their first win in this season, across all competitions. It was a great day for the Gunners as they struggled from two EPL defeats to thrash the second division team, West Brom in the Carabao Cup. 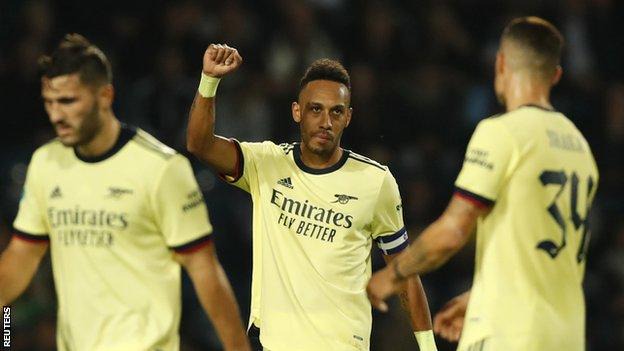 As the Gunners were about to recover from the shock of that loss, Chelsea hammered them again. This time around it was the same 2:0, but it was at the Emirates Stadium. So, as it stands now, Arsenal have not recorded any point or any goal in the English top flight football, EPL.

Following this great winning Arsenal achieved, do we assume that Arsenal have recovered from their woes this season?

After the match against West Bromwich Albion, Arsenal manager, Mikel Arteta submitted that  "when you lose a game, as quick as possible you have to win. "Today's game is going to give us some confidence. We had players who played some first minutes."

The above submmission from Mikel Arteta directly suggest that the winning will give the Gunners the confidence to go ahead and win Manchester City in their next EPL match.

Can the Gunners keep the vibe and record their first EPL win or at least a goal in the EPL?

It should be recalled that Aubameyang records a hat trick in the match against West Brom. Other Arsenal players, Pepe, Saka and Lacazette also recorded one goal each in the game. It was indeed a great game for the Gunners.

Now, irrespective of what the score line is, at the moment, there is something fundamentally wrong in the preparedness of the Arsenal players for this season. The coach needs to find a means of getting the players together, to boast their confidence and assure them of the supports from management and fans.

Well, this is my opinion.

Do you think Arsenal has recovered from their woes after Yesterday's winning?