How Barcelona Could Line Up Today Against Cadiz

Barcelona will lock horns with Cadiz later today in the game week 6 fixtures of the Spanish Laliga campaign. The Blaugrana will be hoping to bounce back from their disappointing start to the new season which has seen them occupying the eighth spot on the log.

Barcelona will be going into Thursday's game in search of a victory over the newly-promoted side to return to the winning ways after their shocking 1-1 draw with Granada last Monday. 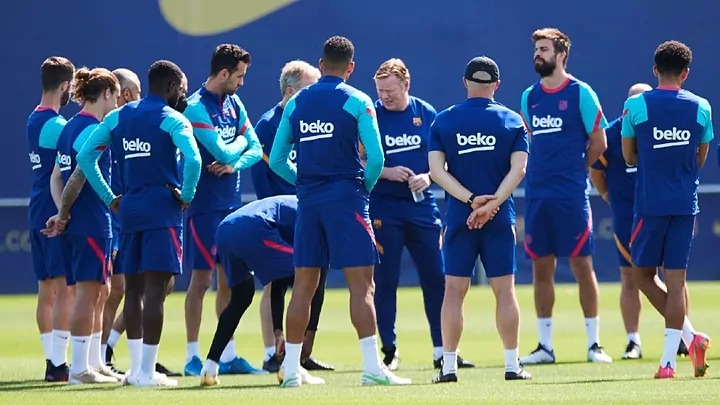 Barcelona will on Thursday night miss the services of their integral midfielder Pedri, due to injury, while the likes of Sergio Aguero, Ansu Fati, Martin Braithwaite, and Ousmane Dembele remain unavailable for the team as they are currently recovering from injury.

Marc-Andre ter Stegen is expected to retain his spot with the hope that he keeps a clean sheet.

Gerard Pique is expected to return to his normal position after the Spanish played as a center forward in their last game against Granada.

Ronald Araujo's performance against Granada that saw him scoring a vital goal for Barcelona is arguably enough to guarantee him retaining his spot today.

Eric Garcia was outstanding in their last game with so many decent crosses into the box for Barcelona, he is also expected to be on the starting lineup of the team.

Sergi Roberto played as a midfielder against Granada, but he is expected to fill the right-hand side of the Barcelona defence later today.

Sergino Dest is expected to play as a left-wing back for Barcelona later today, following the absence of Alejandro Balde and Jodi Alba who have been ruled out of the game due to injuries.

Frenkie de Jong is expected to make the starting lineup for Barcelona today, after his decent performance in their last game.

Sergio Busquets is one of the most important players in the Barcelona midfielder and he is also expected to start the game.

Philippe Coutinho is also expected to start for Barcelona later today with Pedri rolled out of the game due to injury.

Memphis Depay has been very impressive for Barcelona this season and he is expected to retain his spot.

Yusuf Demir is expected to name in the starting lineup of Barcelona following the absence of many of the first team strikers, the 18-year-old is expected to be on the attacking line on Thursday night.