Why Barcelona Could End the season without a trophy

Why Barcelona Could End the season without a trophy

In football, failure is when a big team fails to win a single trophy at the end of a season especially when a team has spent millions in the purchase of new players. This season, there will be lots of big teams without a trophy, and Barcelona, the club paying the wages of the best player in the world is at risk of ending this year without a trophy.

This unfortunate position is caused by some depressing factors which have the affected the performance of the team.

This piece will point out five reasons why the Spanish giants will end this season with ignominy. It's no longer a secret that the club's president, Maria Bartomeu has been mismanaging the affairs of the club. That five bigwigs of the club resigned from their position earlier in the year is due to the president's ineptitude. Also, there have been reports of clashes between Messi and Bartomeu, which has made the star player to refuse signing a new contract. And this has greatly affected the performance of the team on the pitch. Millions was spent to bring in Griezmann, but it seems that money was wasted as the French man has failed to live up to his billing. Griezmann was signed to bolster the attack and take off some weight off the shoulders of Messi, but it's Messi that is still doing what he been doing despite the French man's presence. De Jong has not really been performing well too. And I guess he is being affected by the coach's tactics. Barcelona changed their coach in January. Valverde was accused of not playing the 'Barcelona way' even though he won the last two titles. Quequi Sentien was brought in to change the narrative. But the story hasn't been beautiful. The results haven't been coming, and Barcelona have lost top spot to bitter rivals, and only needs a miracle to retain the title. And with their struggles, it's hard to see them winning the champions league. The change of coaches have affected the teams performance in a great way. 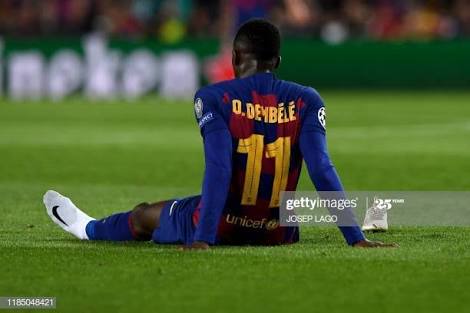 Suarez and Dembele have both suffered series of injuries. Dembele's injury issues have kept him out for a major part of the season thus depriving the Catalans of his speed and creativity. This has created a problem in the attack with Messi doing most of the work of creating and scoring goals.

Apart from Messi and Ter Stegen, Barcelona just do not have the quality to compete with the best. The team is repleted with players who are below par. At cursory look at the team will show that the defense is poor, the midfield is aging and slow, and the attack needs a revamping to help Messi who has proved that he does the work of a midfielder and scorer with 22 goals and 20 assists at the time of writing