By Godaik (self meida writer) | 4 days

Napoli second highest scorer in history, Dries Martens, has shelved plans to leave the club due to Victor Osimhen's foreseeable long absence in January when he will be involved in the Africa Cup Nations finals with Nigeria in Cameroun. 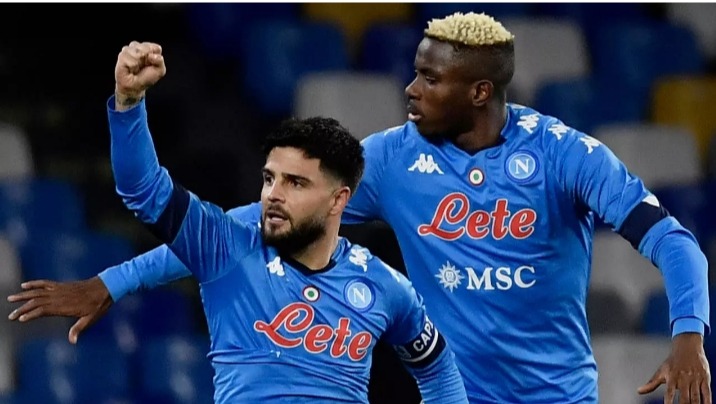 Osimhen and Martens celebrating a goal by Napoli

The 34-year-old who in April surpassed Diego Maradona's 115 goal record for the club, told Corriere della Sera he had no reason to leave the club.

"I do not think I would leave Naples. I have absolutely no reason to do so," stated the Belgium striker who has scored 116 goals since 2013, but is yet break the record of Napoli's former captain Marek Hamsik, who scored 121 goals for the club.

Martens is on €4.5 million annual salary, which is considered "heavy" by Napoli, who are frantically looking to cut down on wage bill. But the club are appreciative of his decision against the backdrop of missing Osimhen's services for four-week in January.

Osimhen joined the Azzurri from Lille last summer for a record €70 million, only to have his maiden Serie A campaign greatly marred by COVID-19 infection and shoulder injury, which ruled him out for a total of 90 days.

The 22-year-old returned to prove his mettle, scoring 10 goals in 24 matches, as the club finished fifth on the log, missing out on Champions League spot on the final day of the season.

Cristiano Ronaldo Stirs Up Reactions After He Asked His Fans To Caption The Look On His Face.

Top 20 National Football Teams And Their All Time Highest Goalscorers

Checkout The First 6 Premier League Games For Chelsea Next Season

The Fixtures For The 2021/2022 EPL Season Has Been Announced, Check Out The Opening Day Matches