By Ademideayo1 (self media writer) | 2 years ago

For those who did not know, El clasico is a term that refers to the match played between the two famous team in the La liga Real Madrid and Barcelona.

Let's rewind back to some Old facts about this rivarly:

1. When did it first happen?

El Classico is one of the oldest rivaries in the world, with 116 years of history. It is interesting to know that these two teams first confrontation came back then on May 13 1902, a coronation cup match that Barcelona won 3-1.

2. What is the story behind this old rivarly?

3. What does the name refer to?

In the beginning the term was only used for Barca vs Real Madrid matches in "Laliga" bit Nowadays if you see the El Classico it is used as an expression of two rivals around the world.

4. How famous is the Competition?

Another fun fact is that after the Uefa Champions league final, El Classico is the most followed club match on the planet.

Who do you think is the top scorer? For sure the answer is the Argentina all-time star, Messi, who has scored 26 goals in 33 matches, while 14 of them has been netted in LaLiga. After the 32-year-old, there is Alfredo di Stefano and Cristiano Ronaldo who have managed 18, while Raul is also there with 15 goals. Messi is also the player with the most assists as he has provided 13 plus the two hat-tricks he has.

It is interesting to know that the last goaless draw came on December 19 2019 and the previous one was on the 23 of November 2002 and both we're at the Camp Nou.

7. Ronaldihino magic made Real Madrid fans stand on their feet.

All through history, many stars have graced the pitch all over the world, but how many have received a standing ovation from supporters? Not many for sure but the Brazilian magic in 2005 made Madrid fans stand on their feet to appuald his brilliance has he scored a beautiful solo goal in Barca's Memorable victory.

Other amazing facts was when Real Madrid trashed Barcelona 11 -1 on the 19th of June 1943. The catalan side we're already down 8-0 in the first half. 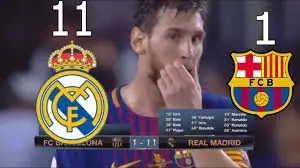