Rivers United, Nasarawa and Pillars All Advance To Last Eight of Aiteo Cup

By Diegwu (self media writer) | 10 months ago 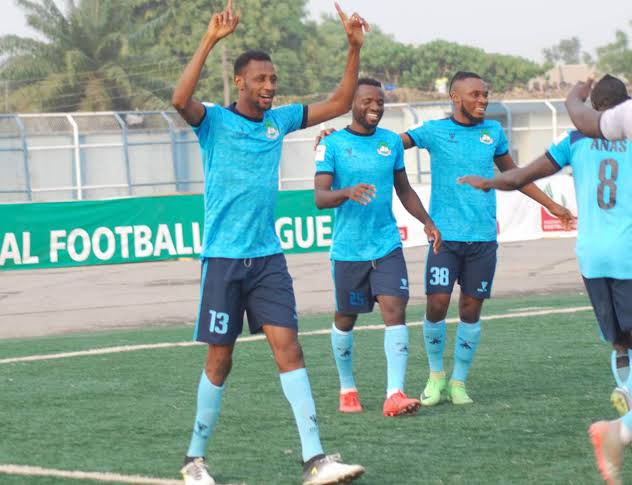 Nigeria Professional Football League sides Rivers United, Kano Pillars, Nasarawa United all progressed to the quarter finals of the 2021 Federation Cup (Nigeria' version of the FA Cup), in what was an exciting round of last sixteen matches that saw top tier sides, Lobi Stars, Wikki Tourists and Abia Warriors all knocked out by second tier opponents.

We start our Federation Cup Round of 16 review from Aba where NPFL sides Rivers United and Heartland clashed at the Enyimba Stadium in what was one of the two all-NPFL clash.

Rivers United took the lead in the 37th minute when Sunday Adetunji scored from a brilliant delivery from Lookman Binuyo. However Heartland equalized when Chijioke Akuneto volleyed into the bottom corner following a fine delivery from Chidera Ezeh.

However, it was the side from Port Harcourt that carried the day scoring two late goals Paul Aquah in the 79th minute and a screamer from Fortune Omomuwari in stoppage time.

Tornadoes took a shock lead in the 18th minute through 'Lookman' but Warriors equalized just before half time through Godwin Obaje. However, Tornadoes' dominant 2nd half display lead to two goals seven minutes with Peter Momoh and 'Ahmadu' scoring. 'Ahmadu' scored a late goal for Abia Warriors but it was not enough to prevent Niger Tornadoes from getting a famous win which guarantees them a quarter-final spot where they will face Rivers United.

The day's other upset took place at the Dan Ayam Stadium Owerri where 2nd tier side Bayelsa United stunned NPFL side Lobi Stars 2-0 to book a quarter final date with fellow NNL side Gateway FC.

Bayelsa took the lead in the 20th minute through Emo Joseph before getting his brace in the 60th minute.

Meanwhile Gateway FC are through to the last 8 after beating NPFL side Wikki Tourists 5-4 on penalties after the match ended goalless at the Nnamdi Azikiwe Stadium Enugu.

Reigning Cup champions Kano Pillars and fellow NPFL side Sunshine Stars are through to the last eight where they will face each other after both sides needed penalty shootouts in other to qualify.

FEDERATION CUP ROUND OF 16 (MEN)

Date and venue will be communicated soon

Content created and supplied by: Diegwu (via Opera News )