6 of The Weirdest Reasons For Getting Sent Off

Despite the fact that most fans dislike them, red cards are an unavoidable element of football and have been for decades. During the current Premier League season, 36 of them have been used, and for a variety of reasons. We've seen poor fouls, diving, violent conduct, and the usual suspects, and while some have piqued the interest of spectators, none have been really unusual. That isn't always the case, though. Referees can choose to show players the red card for weird reasons. 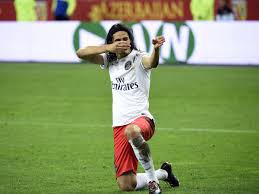 Most of you have seen the athletes on the field engage in some unique celebrations. Nani's backflip, Ronaldo's Sii, and Mbappe's cross hands across his chest are among those that everyone admires. However, there are situations when the player's celebrations can land them in hot water. Edinson Cavani was the one who was sent off for celebrating his goal. In a Ligue 1 match against Lens, table-topper Paris St Germain was leading 2-1. Jean Phillippe Gbamin hauled down Cavani in the box in the early minutes of the second half. The penalty was easily converted by the Uruguayan attacker after the referee pointed to the spot. The forward did his sniper-rifle celebration after increasing the lead. The referee was irritated by the celebration and awarded the player a yellow card. When Cavani attempted to reconcile with the referee, the referee gave him a second yellow and sent him out. PSG, on the other hand, went on to win the game despite having only 10 men on the pitch at full time out of a total of 11. 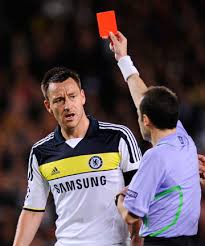 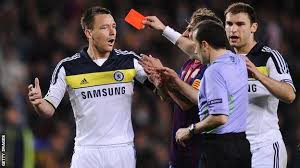 Chelsea made it to the Champions League final in 2012 holding Barcelona at Camp Nou, but not before their captain, John Terry, cast doubt on the club's future in the Champions League. Terry made the Blues' mission much more difficult by kneeing the unknowing Alexis Sanchez in the back with the ball a considerable way out, with his side still ahead on aggregate but already facing something of an attacking onslaught from their illustrious opponents. Terry was issued his marching orders, forcing his team to play the remainder of the game with only ten men. In honor of that moment of insanity. 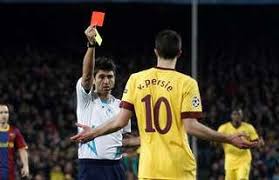 Barcelona's victory over Arsenal in the second round of the Champions League in 2011 seems apparent now, but it's easy to forget that the Gunners led for a large amount of the tie. Arsenal took the lead in the second leg at the Camp Nou when Sergio Busquets' 53rd-minute own goal cancelled out Lionel Messi's first goal of the night. Arsenal's hearts were dashed just three minutes later when Robin van Persie, who had already received a yellow card, shot and missed a second goal after referee Massimo Busacca's whistle went for offside against the Dutchman. Despite van Persie's flimsy claim that he couldn't hear the whistle due to the volume from the 90,000-strong crowd, the official gave him a second yellow card for kicking the ball away and he was issued a red card 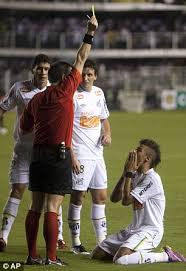 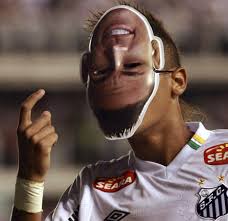 Neymar, the Brazilian superstar, is no stranger to controversy, but he was the victim of an egregious red card while playing for Santos. In a Copa Libertadores match against Chilean side Colo Colo, the then-19-year-old attacker scored a spectacular solo goal to put his team up 3-0. He then chose to celebrate in an unconventional fashion, having a fan hand him a mask of his own face, which he put on upside-down. The referee, for whatever reason, felt this was a rule violation and issued the forward his second yellow card, sending him out. Naturally, Neymar objected, but the referee was unconcerned. Thankfully, Santos hung on to win, despite the fact that Colo Colo scored again and both teams had two more players sent off. Santos manager Marcelo Martelotte appeared to have little sympathy for Neymar after the game, claiming that he was sent out for "not knowing the rules," which seemed harsh to say the least. 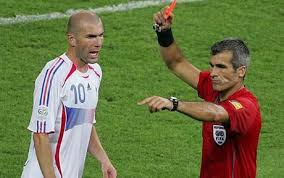 On the biggest stage, the best player makes the biggest mistake of all. The 2006 World Cup final was meant to be a fitting end to the Frenchman's stellar career, and it appeared to be so as he scored a ludicrously casual penalty off the bar (and just over the line) to put his side ahead early against Italy. But then things went awry, with Zidane taking offense to some trash talk from man-marker Marco Materazzi , before spinning around and burying his head in the former Everton defender's chest. It was a startling scene that deserved the red card that followed. As Italy went on to win the game and the tournament, Zidane's career came to an end as he trudged past the World Cup trophy and down the tunnel. 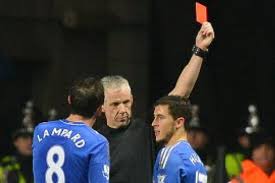 Eden Hazard, another Florentino Perez Galactico signing, is known for his amazing skills on the pitch more than his fury. His tempers exploded in an EFL Cup semi-final against Swansea in 2013, when the supporters witnessed their favorite player lose his cool on the pitch, resulting in a red card. Swansea had a two-goal lead against the Blues after the first leg, and both clubs were tied in the 80th minute of the second leg. It doesn't need to be said that Chelsea was desperate to score a goal and turn their fortunes around. After that, the true incident occurred. The ball went for a goal kick. To speed things up and get the ball back into play, the Belgian superstar jogged quickly. However, the player noticed that the ball boy was first to the ball, delaying the game's resumption. Hazard made an attempt to snare the ball from the ball boy. The player's meticulous attempt, however, was in fruitless as the teenager dived to the ground and firmly grasped the ball. In an apparent attempt to restart the game, Hazard seemed to kick the ball boy in the stomach in other to collect the ball. The Big Belgian was then given a red card by the referee. Furthermore, the action is regarded as a dishonorable, if not odd, behavior.