Borussia Dortmund travel to the RheinEnergie Stadion on Saturday to face FC Koln in a Bundesliga clash as they continue their top-four chase.

Dortmund's recent upturn in form has seen them close the gap on Eintracht Frankfurt to just two points. With nine games to go in the season, it does look like the race for the top four could move towards a photo-finish. 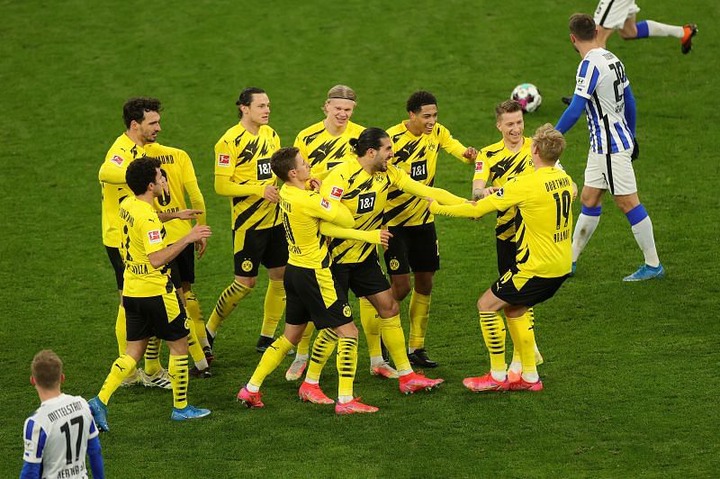 Dortmund beat Hertha Berlin 2-0 last week as they bounced back from losing 4-2 to Bayern Munich in Der Klassiker the week before.

Julian Brandt and Youssoufa Moukoko scored goals for Dortmund in that win against Hertha.

Koln, on the other hand, are just a point above the relegation zone and have not won any of their last five league games. In fact, they have picked up just a solitary point in those games. That poor run has seen them pulled back into the fight against relegation.

Last weekend, Koln lost 2-1 to Union Berlin after they had taken the lead through an Ondrej Duda penalty. Max Kruse and Christopher Trimmel scored in the second half for Union to condemn Koln to another defeat.

Dortmund have won 16 of the last 28 games they have played against Koln, with only five losses in that period.

Sebastiaan Bornauw and Florian Kainz are still injured and unlikely to play a part in this game. Jannes Horn has been suspended after an accumulation of yellow cards.

Koln are going through a wretched run of form that could see them dropped from the Bundesliga. Meanwhile, Dortmund have been on the up with positive recent results.

However, with the injuries that are affecting them, this might not be a cakewalk for Terzic's side. We expect Dortmund to take three points from this game in a narrow victory.