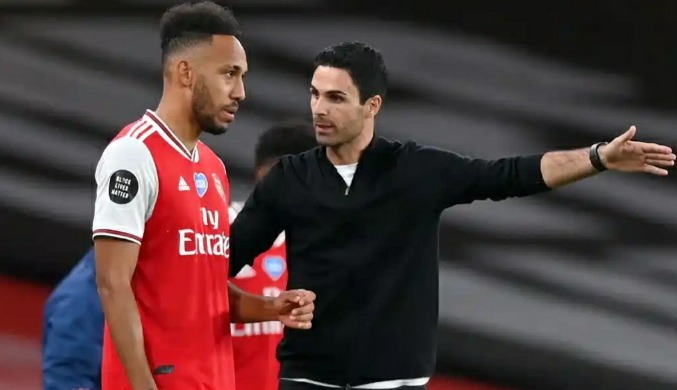 Arsenal manager, Mikel Arteta has provided update on the contract situation of prolific striker, Pierre-Emerick Aubameyang at the London club.

The Spanish manager has revealed that he is happy with the way talks with the striker over a new deal are going. The 31-year-old Gabon International striker has just one year left on his current deal at Arsenal and it has been reported that he could force an exit from the club as he is in search of Champions League football which Arsenal can't offer next season.

However, FC Barcelona and Inter Milan can guarantee Champions League football and both clubs are keen on signing him in the summer. Pierre-Emerick Aubameyang, who has scored 25 goals this season to keep Arsenal in the top half of the Premier League table has now entered the last 12 months of his contract.

Meanwhile, Mikel Arteta is hopeful that the Gabonese will sign a new contract and commit his future to the club. "I like the way the conversations are going, I like what I'm hearing. I'm sure for both parties, the quicker we can do it, the better for everyone.

'I am confident he will extend his stay. "He's generally happy. I think he is enjoying his football. He is settled in the country and his family are good.

"I think he can sense - and we've told him - how much we like him, how much we value him. I think the connection he has with the fans is unique. I believe he is in the perfect place for him. "Everything I have from him and the people around him is the same. So I don't have any arguments to say something different."

Arsenal will look to continue their good run of form when they make the trip to Villa Park to face Aston Villa on Tuesday (today) night.

The Gunners are placed 10th on the Premier League table and they need a win to boost their chances of qualifying for Europe next season via league position.