By EmelieMedia (self media writer) | 8 months ago 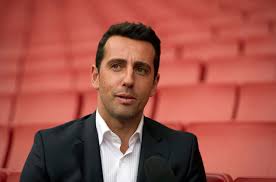 Arsenal technical director Eduardo Cesar, popularly known as Edu, said in an interview on sky sports that the signings Arsenal made in recent transfer windows are geared towards building for the future. He probably said that to clarify those who questioned the club's transfer strategy following a disastrous start to the new Premier League season.

Having said that, I think their poor start to the season shows the strategy is currently not working. It also shows the club hierarchy has not learnt from their past mistakes. That is why there has been little or no progress in the last few years. Correct me if I'm wrong, Arsenal has been planning for the future for the past 10 to 15 years. In that time they have had Theo Walcott, Samir Nasri, Cesc Fabregas and Robin van Persie, to name but a few. Planning for the future is good but in football, you can't get to that promised land if your present is messed up. With the way they are going, players like Saka and Sambi Lokonga will move on in a few years just like Nasri, Fabregas and Van Persie did.

To stop that from happening, Arsenal should do the following 2 things.

1) Employ an experienced manager with a big reputation

For me, Arsenal needs to drop Mikel Arteta in other to move forward. Having not qualified for the Champions League in several years they no longer have the pulling power they used to have. Therefore, they need a manager that can attract the best talents even without being in the top competition.

For instance, playing under Carlo Ancelotti was attractive enough to make James Rodriguez sign for Everton last summer. Those are the kind of managers Arsenal should be going for. It will be preferable if that the manager has a track record of building a squad that can compete in the shortest amount of time.

Chelsea must be doing something right for them to spend around £100 million in improving their squad in the transfer window and still end up with a profit of around £30 million. In addition to that, they have many young players playing in their team.

Chelsea's strategy has a lot to do with the youth team. Any club that is building for the future must have a very good youth team. The very talented ones end up in their first team while others who couldn't make it are sold. The money made is used to upgrade the first team.

Arsenal has a good youth team but unlike Chelsea, they lack quality experienced players. They need to have a good mix of youth and experience before they can succeed. Therefore, instead of adding more young players like did last summer, they should have targeted quality players in the age range of 24 to 28. Like I said earlier, having a reputable manager makes it easier.

Content created and supplied by: EmelieMedia (via Opera News )