On Wednesday, the 36th round of Premier League matches continued. The summary of the 4 matches played are highlighted below, as well as the Premier League standings.

Burnley played hosts to Wolverhampton, as the away side were held to a 1-1 draw, which reduced their chances of making it to the top 4.

In the 76th minute Jimenez of Wolverhampton volleyed the ball into the back of the net to score the opening goal.

In the 6th minute of added time, Burnley levelled the scoreline after Chris Wood converted a penalty kick.

Manchester City welcomed Bournemouth to the Etihad Stadium, and the game ended 2-1.

David Silva curled a direct free kick to score the opening goal for Manchester City in the 6th minute.

David Silva turned provider when he assisted Gabriel Jesus to score in the 39th minute for the home side.

Bournemouth scored what seemed a consolation goal in the 88th minute of the game through a David Brooks goal.

Newcastle United were beaten by Tottenham 1-3.

In the 27th minute of the game, Son opened the scoring for the away side.

Newcastle equalised in the 56th minute when Matt Ritchie reacted first to a loose ball to score.

Harry Kane responded with a fine header in the 60th minute to give Tottenham the lead again.

Harry Kane doubled his tally, when he headed home a loose ball to score in the 90th minute.

The last game of the day witnessed Arsenal versus the title winners Liverpool, and Arsenal won 2-1.

In the 20th minute, Sadio Mane of Liverpool scored to give his side the lead in the encounter.

Arsenal equalised in the 32nd minute from a Lacazette goal.

Lacazette turned provider when he assisted Nelson to score in the 44th minute to give Arsenal the lead.

After Wednesday fixtures have been played, the table shows that while the teams to be relegated are almost certain, the race to qualify for the Champions League intensifies with each game. Also Liverpool will be unable to break Manchester City's 100 point record, which they set in the 2017/2018 season after they lost to Arsenal. 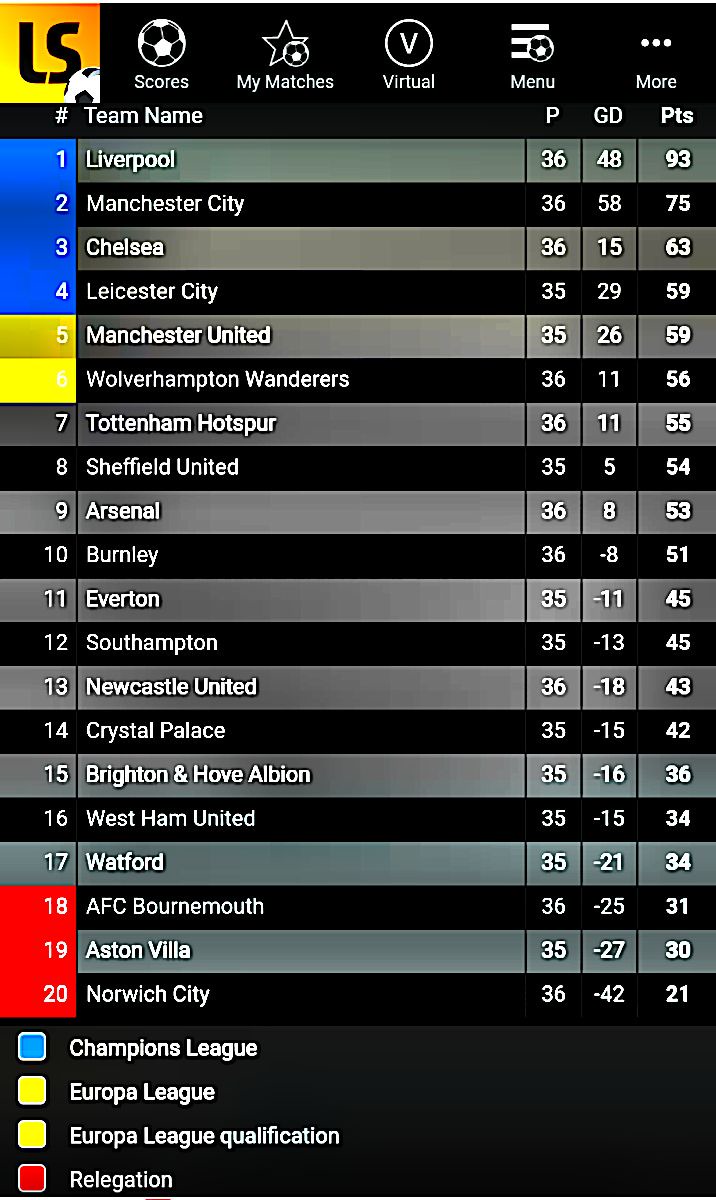