Manchester United will be looking for a big performance when they host fierce rivals Liverpool at Old Trafford in Matchday 9 fixture of the Premier League today .

Ole Gunnar Solskjaer's side have only picked up one win in their last four league matches but will go into the game on the back of a dramatic late comeback win over Atalanta in the Champions League during midweek.

Manchester United have only secured one win in their last 10 Premier League meetings with Liverpool (D6 L3), United lost this fixture 4-2 last season.

Here's a look at the starting XI Ole Gunnar Solskjaer could pick against Liverpool...

The Spaniard looks to getting to his former form but he has only kept one clean sheet so far this season. He will have to be at his brilliant best to keep out a Liverpool side that has scored the second most goals in the Premier League this season.

Wan-Bissaka will need to be at his very best to stop both Sadio Mane and Andrew Robertson from influencing the game.

With Raphael Varane still out injured with a muscle injury , the Swede will continue to cover for him

The United skipper looked rusty and lacking match sharpness against Leicester last weekend and was at fault for a goal or two. He put in a better performance in the Champions League, scoring a rare goal to bring Manchester United levelled against Atalanta.

Shaw hasn't reach the form of last season and the England international with face a battle to stop Mohamed Salah, who has scored in his last nine appearances in a row in all competitions for Liverpool.

It is these kinds of games against the like of Liverpool, Manchester City and others that tend to bring out the best in him. That is needed more than ever here.

The Brazilian will need to put in a flawless performance to help United have a control of the midfield.

The Portuguese hasn't been able to influence proceedings in recent matches but turned up in the second half against Atalanta in the Champions League and helped United secure a comeback win with his two assists.

He scored the goal that brought United back into the game against Atalanta on Wednesday before going off due to a minor knock suffered . He's expected to be fit for this clash. Rashford has scored in each of United’s last two victories against Liverpool.

Ronaldo scored the winner against Atalanta and will be looking to end his mini-drought in the league after failing to score in his last three league matches.

He played well after coming off the bench against Atalanta and could be restored to the starting line up for this clash. 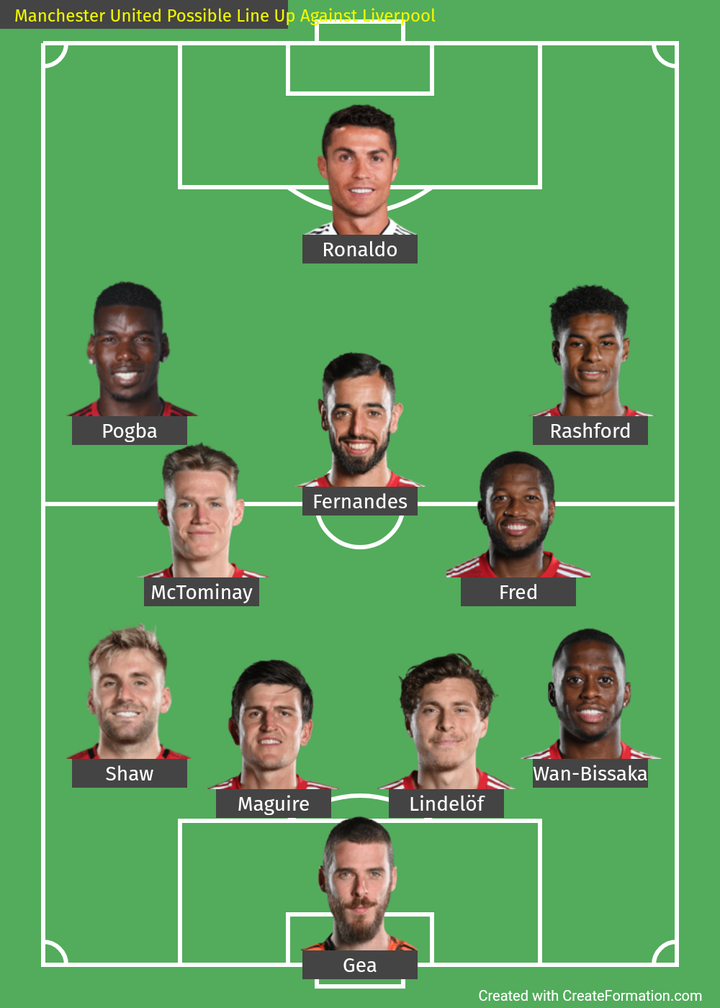