Manchester United fail to beat Chelsea after a disappointing display in the FA Cup Semi-Final this evening. 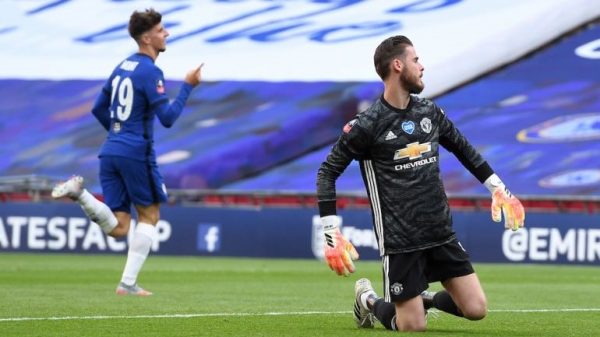 Manchester United lose 3-1 to Chelsea in the FA Cup Semi-Final this evening. A very lacklustre performance with lack of concentration and individual errors.

Both teams kick off the first half in a 5-3-2 formation with Man Utd playing right to left.

Opening exchanges are cagey with Chelsea knocking it around their back line. Man Utd keeping it fairly tight. Man Utd look to be playing on the counter attack. Cabellero has been required for two headers as he plays as more of a sweeper keeper.

Willian crossed the ball to the back post to an unmarked Alonso who heads the ball over the bar. Should be 1-0 to Chelsea.

Bruno Fernandes injury concern after Jorginho was late in on Bruno. Pogba has been sent to warm up as a precaution.

Manchester United are struggling to get the ball in the first 20 minutes, which is a similar run of play from the previous three matches. The wing-backs have been pinned back and are not providing the width needed in the attack – very difficult to get out of our half.

Man Utd trying to play out from the back with a lot of sideways and backwards passing. De Gea ends up clearing it but falls to a Chelsea shirt. Mason Mount hits it from the edge of the box but it goes out for a corner.

Manchester United try a counter attack with Bruno playing the ball to find Rashford, but Rudiger does well. Bruno down injured again as he’s been caught in a rather sensitive area.

Maguire fouls Giroud – Mount takes the free kick but it goes out for a goal kick. Man Utd seem to be playing a little quicker now.

Very good spell for United keeping the ball well. Bruno breaks James and he gets on the ball and Man Utd keep the attack going with a series off passes. The period culminates in Fred being fouled on the edge of the box and a free kick in a dangerous position.

Rashford and Bruno stand over it. Bruno strikes the ball and it’s saved by Cabellero. The subsequent corner which is hit hard and low but it goes all the way through the box.

Chelsea counter attack, but the attack fizzles out into nothing. Very 50-50 match.

Another free kick for Man Utd, this time in more of a Marcus Rashford range, however, he hits the ball into the base of the wall. 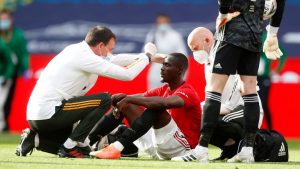 Maguire and Bailly down injured after a head collision trying to defend Giroud. McTominay starts to warm up.

Martial on for Bailly

Hopefully Bailly is ok. Change of style and formation for Man Utd, will this open the deadlock?

The ball is played over the top by Matic and its awkwardly bouncing ball. Martial gets his foot there ahead of Zouma. VAR checked it but it was deemed to be outside the box. Throw in for Chelsea.

Man Utd playing better now, Bruno almost slipped the ball into Dan James but it was slightly over hit.

Messy goal for Chelsea – The ball put down the right hand flank from Willian to Azpilicueta. The right back crosses the ball into Giroud who touches the ball home. Errors from multiple players led to the goal. Chelsea take the lead 1-0.

Second Half – No changes

Gift for Chelsea. Williams passes the ball to Mason Mount who hits the ball outside the box and De Gea makes a terrible save. Unexplainable. He was on the side of the shot, routine save. He didn’t get behind the ball and De Gea’s hands were simply not strong enough. 2-0 Chelsea and a long way back now…

Chance for Marcus Rashford. Man Utd hit it long to Rashford who runs on to it. Marcus did well to get the shot off but it goes wide.

Pogba on for Fred

Greenwood on for James

Seems to be a lot of errors throughout Man Utd today, misplaced passing and poor touches. Theres’ still a feeling Man Utd can get

Chance for Maguire, brilliant cross from Bruno from a corner. Maguire wins the header but it goes wide.

Yet again, Man Utd get beaten on the near post. The ball comes down Man Utd’s right hand side but failed to stop the cross coming in. Rudiger puts pressure on Harry Maguire who toe pokes it into the near post past David De Gea…

Ighalo on for Rashford

Fosu-Mensah on for Wan-Bissaka

Rival fans will criticise but there’s no doubt with this one. Martial runs into the box and is clearly fouled by the defender.

Bruno Fernandes steps up… and confidently finishes in the bottom left hand corner.

Five minutes to is it too late?

The match didn’t go anywhere and it finishes 3-1 to Chelsea.

Ole’s first half tactics were questionable.

Forced to change to more positive tactics with Bailly coming off injured.

Grand scheme of things, as long as we secure top four, it’s been a good end to the season.