By Anueyiagu (self media writer) | 10 months ago 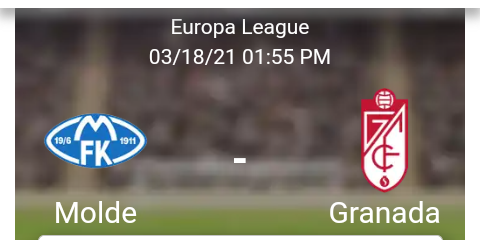 Molde will be hosting Granada in Budapest for their Europa League round of 16 return leg clash this Thursday. Granada leads the tie 2-0 and Molde have a task to turn it around, despite playing away in Hungary owing to Norway’s Covid-19 travel restrictions. Molde haven’t played a lot in 2021 and will be at a disadvantage here; they’ve had just three competitive matches this year and more, they go to this game without midfielder Martin Ellingsen, a regular starter, who is suspended. All of their games in 2021 have been in the Europa League and they lacked sharpness in the first leg loss to Granada, which has now left them with three losses in seven Europa League matches. They have just one clean sheet in seven Europa League matches and their last 10 matches across all competitions have produced only two clean sheets for the side.

Granada followed on their win over Molde with a key win in La Liga, beating Real Sociedad 1-0. After playing two home matches, it is time for them to try and keep up the performance this time away from home. They haven’t done so well on their travels, with just one win in their last seven away matches. That win came against lower tier side Navalcarnero in the Copa del Rey. A positive though is that Granada have managed to score in each of their last 10 matches. They are winless in the last four away matches, and lost each of the last three. Also, Granada have one clean sheet in 11 away matches. However in Europa League action, Granada have a good run away from home, with four wins in their six matches. This being their debut season in the competition, the team has already surpassed expectations but with a good lead from the first leg, will want to go on and on.

Granada have one clean sheet in 11 away matches.

Molde have played three matches in 2021.

Granada have scored in each of their last 10 matches.

Granada have four wins in six away matches in Europa League.

Content created and supplied by: Anueyiagu (via Opera News )