WWE has confirmed that Drew McIntyre will defend the WWE Championship once again against Dolph Ziggler on next week's episode of RAW. However this time, McIntyre will choose the stipulation, and he'd reveal it right before their match begins. 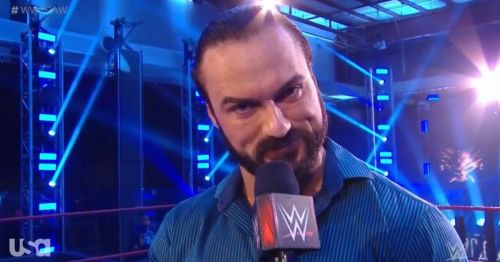 What happened on this week's RAW between Drew McIntyre and Dolph Ziggler?

Drew McIntyre revealed in a backstage interview with Sarah Schreiber that he was on his way to the ring to discuss his future as the WWE Champion.

The segment happened before the main event, and it had Drew McIntyre make his entrance to a great pop from the developmental talents at the Performance Center.

McIntyre spoke about his win over Dolph Ziggler from the previous night and stated that it was now time to look forward to SummerSlam.

The Scottish Psychopath talked about needing a worthy opponent at the biggest show after SummerSlam, and that's when Dolph Ziggler's music hit. The Showoff hit the ring and told McIntyre that he saw fear in the WWE Champion's eyes last night.

Ziggler tried to talk his way into getting a title rematch, but McIntyre was having none of it as he felt Dolph was embarrassing himself.

Ziggler tried to get into McIntyre's face only to get hit with a Glasgow Kiss Headbutt.

Dolph Ziggler, however, was not done as he sat on the mat and called McIntyre a 'son of a b****' as the WWE Champion walked back to the locker room.

Dolph Ziggler wanted his rematch, and he didn't matter when or where it happened. The WWE Champion turned around and said that he'd changed his mind and that he would accept the challenge for a rematch if he gets to choose the stipulation.

Ziggler curiously asked about the stipulation of the match, but Drew McIntyre said that he would only reveal it right before their title showdown on RAW next week. McIntyre was in the mood for some payback.

Ziggler had announced the stipulation before the bell rang for their Extreme Rules title match, which ended with Drew McIntyre retaining the WWE title.

The reported plan is to have Randy Orton and McIntyre in a SummerSlam main event match for the WWE title. Next week's rematch between McIntyre and Ziggler on RAW should end their short programme before WWE moves on to the big one.