Adam Pearce Has A Message For Roman Reigns Before WWE SmackDown

Adam Pearce has sent a warning to Roman Reigns ahead of their WWE Universal Championship match at the 2021 Royal Rumble pay-per-view.

Writing on Twitter, the WWE official cryptically suggested that Roman Reigns has “awoken a sleeping giant” by forcing him to compete again. The quote in the tweet was originally used by Japanese Admiral Isoroku Yamamoto to describe the Pearl Harbor attack. 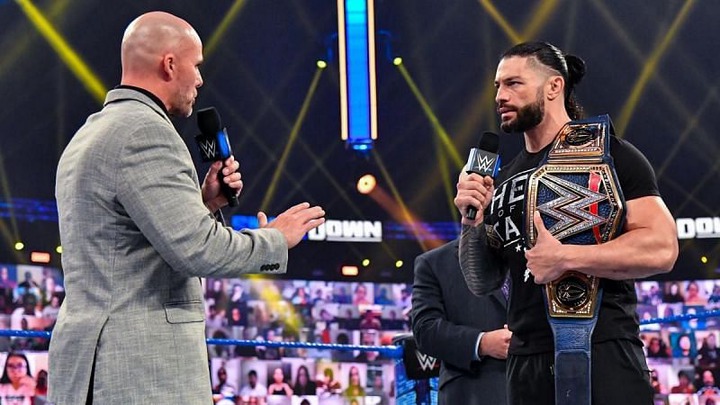 The picture above shows Pearce trying to plead with Roman Reigns in the closing stages of last week’s SmackDown. The final gauntlet match of the night came down to Pearce, who had not competed in over six years, and Shinsuke Nakamura.

Roman Reigns and Jey Uso attacked Nakamura and Pearce before Uso placed the latter over Nakamura’s body. The referee then counted the pinfall, meaning Pearce won the match to become the number one contender for Roman Reigns’ Universal Championship.

Why is Roman Reigns feuding with Adam Pearce?

Roman Reigns accused Pearce of believing that he was “stupid” – something that the WWE official repeatedly denied. Paul Heyman later informed Pearce that he “pulled a few strings” and entered him into the gauntlet match, which the authority figure ended up winning.