Eden Hazard left Chelsea in the summer of 2019, but his move to Santiago Bernabeu has not gone as planned, with the Belgian star suffering a string of injuries. 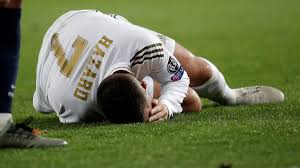 Since Marina Granovskaia sold Hazard in 2019, he has missed 57 games, which is more than he has played in a Madrid shirt (51).

There was some resentment when he was sold to Madrid, but his injury record since leaving could show that Granovskaia's decision to sell was correct.

They also obtained a club-record fee, which was significantly higher than the £32 million they paid Lille in 2012 to sign Hazard in the first place.

Although he has been unlucky with the number of problems he has had, it has been argued that the Chelsea board made a brilliant business decision.

In comparison to his time at Stamford Bridge, the Belgian missed only 18 games due to injury and never missed more than a few minutes at a time.

To put that in context, Hazard was at Chelsea for seven years, appearing over 350 times and playing a key role in the club's two Premier League titles.

It could be argued that he was once one of the world's best players, having won the PFA Players' Player of the Year award once and being named to the Team of the Year four times.

Most importantly, Hazard's goals were crucial in the club's two championships and four other major trophies, as he ended up scoring 110 times, 21 of which came in his final season.

Eden Hazard's time at Real Madrid hasn't gone exactly as planned, and he suffered another setback on Thursday night.

In fact, Hazard has been diagnosed with a new hamstring injury, which will keep him out of El Clasico in two weeks.

Hazard is yet to play against Barcelona in his Madrid career. He has missed the last four meetings and could miss a fifth